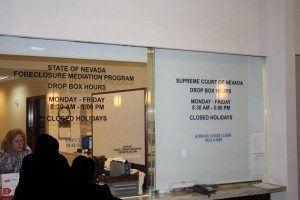 Nevada’s Supreme Court justices today heard oral arguments in a case where they are both judge and defendant. The case, Wells Fargo Bank v. Renslow, challenges the constitutionality of Nevada’s Foreclosure Mediation Program, which was implemented by and is currently administered and run by the Nevada Supreme Court itself.

The Nevada Supreme Court itself has written that an “impartial judiciary is indispensable to our system of justice.” That’s why it is so bizarre that the justices who themselves administer the Foreclosure Mediation Program are now preparing to rule on its constitutionality.

Justices on the Supreme Court not only administer the Foreclosure Mediation Program, but helped craft the original law, implemented the program from scratch, advertise the program on their website, and have frequently and publicly bragged about how many people the program is alleged to have helped. They determine program rules and collect the fees to run the program. Today, they also heard arguments on whether this program is even constitutional.

So intertwined is the Supreme Court with the FMP that, at the Regional Justice Center, business for the FMP and Supreme Court are done at the same window, which opens into the same office.

The Nevada Code of Judicial Conduct states that a judge “shall disqualify himself or herself in any proceeding in which the judge’s impartiality might reasonably be questioned” or if the judge is “a party to the proceeding or an officer, director, general partner, managing partner, or trustee of a party.”

It affronts our system of justice that justices today did not recuse themselves or even acknowledge the conflict of interest they carry from their multiple involvements in the program being challenged. Whatever decision Supreme Court justices make will necessarily be tainted by their heavy participation in the Foreclosure Mediation Program.

Nevada’s Supreme Court also faced controversy in 2003, when, at the request of teacher-union attorneys and the Guinn administration, the court produced what has since become a case study in failed jurisprudence — its Guinn v. Legislature of State of Nevada opinion. The decision produced multiple critical law review articles nationally and inspired at least one Supreme Court staff attorney to resign after losing faith in the court’s impartiality.

Later, the court expressly reversed itself in a 2006 decision, declaring that “the Nevada Constitution should be read as a whole, so as to give effect to and harmonize each provision.”

The Nevada Supreme Court has not announced when it will release its decision in Wells Fargo Bank v. Renslow.

Photo cutline: Supreme Court business and Foreclosure Mediation Program paperwork are handled on different sides of the same window in the Supreme Court’s lobby on the 17th floor of the Regional Justice Center. Behind the window is one office with only a small cubicle divider separating the two sides of the window.

High-resolution photo is available upon request. A portion has been intentionally obscured to protect the identity of individuals at the counter.