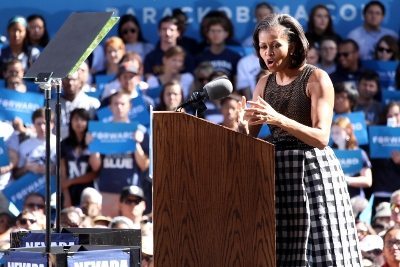 RENO – First Lady Michelle Obama sought to make the case for another term for her husband at a rally at the University of Nevada, Reno today, ahead of a much anticipated first debate in Denver tonight between President Obama and Gov. Mitt Romney.

With the Nov. 6 general election just 34 days away, a crowd estimated at about 3,800 by the fire marshal cheered the first lady as she talked about her husband’s character and accomplishments in his first term, including ending the war in Iraq and eliminating the threat of Osama bin Laden.

Her remarks came on the couple’s 20th anniversary. After the rally, the first lady was set to fly to Denver for the debate and to see her husband for the first time today.

In personal remarks that resembled those she gave at the Democratic National Convention, the first lady said she and her husband were raised to believe that hard work matters more than how much money you make.

“We learned that the truth matters so you don’t take shortcuts; you don’t game the system; you don’t play by your own set of rules,” Obama said. “We learned that none of us gets where we are on our own. None of us. That each of us has a community of people lifting us up.

“See, these are the values that make Barack such an extraordinary husband to me, and such a phenomenal father to our girls,” she said. “And I have seen how those values are so critical for leading this country.”

The first lady also talked about what he faced upon taking office in January 2009.

“This is what welcomed him into the office,” Obama said. “And today, while we still have a long way to go to rebuild our economy, understand that we have had 30 straight months of private sector job growth under this president, a total of 5.1 million new jobs. Good jobs right here in the United States of America. That’s where we are today.”

Obama asked the crowd if they want to return to the policies that got the country into its economic troubles to begin with.

It will come down to a few key states like Nevada, Obama said.

Obama asked the crowd to make sure their friends are registered to vote and actually vote in Nevada to swing the battleground state that is Nevada to the president for a second time.

“If you want to give me a nice anniversary present, here is something you can do,” she said. “From now until November, we’re going to need every single one of you to work like you’ve never worked before.

“So see, what I tell myself is we cannot turn back now,” she said. “Not now. We have come so far, but we have so much more work to do.”