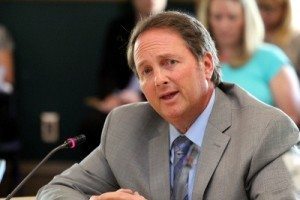 “Bruce’s people-first approach to problem solving has helped pioneer a new era for customer service at the DMV,” Governor Brian Sandoval said.  “His innovative thinking has led to the development of mobile applications, the placement of DMV self service kiosks at grocery stores throughout the state and a reduction in wait times for customers at the DMV. I am confident that Bruce’s leadership and customer-first mentality will be an invaluable asset to B&I.”

Breslow was appointed DMV Director by Governor Brian Sandoval in early 2011.  He formerly served as the Executive Director of the Nevada Agency for Nuclear Projects and as Commissioner and administrative law judge for the Transportation Services Agency under former Governor Kenny Guinn.

Breslow is the former Mayor of Sparks, Nevada. As Mayor, Breslow led the effort to revitalize an oil-blighted gravel pit and transform it into one of Sparks’ newest recreational attractions, the Sparks Marina. From 2003-2005, he served as chairman of the Employee Management Committee for the State of Nevada.

Breslow has also served as Chairman of the Board of the Reno-Sparks Convention and Visitors Authority. His private sector experience includes CB Richard Ellis and Commercial Partners of Nevada, both real estate services firms.

Breslow holds a Bachelor’s degree in Journalism from the University of Missouri and is in the Nevada Broadcasting Hall of Fame. Breslow has also been an international commentator for the last eight summer Olympic Games.