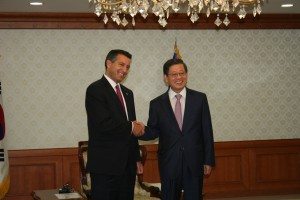 SEOUL — As part of his Trade Mission to the Republic of Korea, Governor Sandoval and representatives of the Governor’s Office of Economic Development met with Korean Prime Minister Kim Hwang-sik on Tuesday to highlight the important economic partnership that can be forged between the state of Nevada and the Republic of Korea. (PHOTO)

“Our meeting was an opportunity to confer directly with Republic of Korea officials regarding economic development in Nevada,” Governor Brian Sandoval said. “The productive discussions we are having will help lay the foundation for more business growth in Nevada and in Korea.”

On Monday evening, the U.S. Ambassador to the Republic of Korea, Sung Y. Kim, hosted a reception and dinner for the Governor and the Nevada delegation which included over 100 Korean investors and business representatives.

In 2010, Korea became the first Asian country to chair the G20 Economic Summit in Seoul. Korea is the world’s 15th largest economy with a Gross Domestic Product of $1,014 billion in 2010. The world’s seventh largest exporter, Korea’s exports and imports in 2010 were $441.5 billion and $400.6 billion respectively.

Kim Hwang-sik has served as the 41st Prime Minister of the Republic of Korea since October 1, 2010. He previously worked in Korea’s judicial system and served as a Supreme Court Justice from 2005-2008.

U.S. Ambassador Sung Y. Kim was confirmed by the U.S. Senate on October 13, 2011. Born in Seoul, Ambassador Kim headed the Office of Korean Affairs at the Department of State from August 2006 to July 2008.

Prichard One Shot Off the Lead

Heller says online gaming bill should not be political football