By ThisIsReno September 27, 2012
Hudson, Wes Falconer and Kathie Mead right next to the spot off Robb Drive and the I-80 where Hudson was rescued. 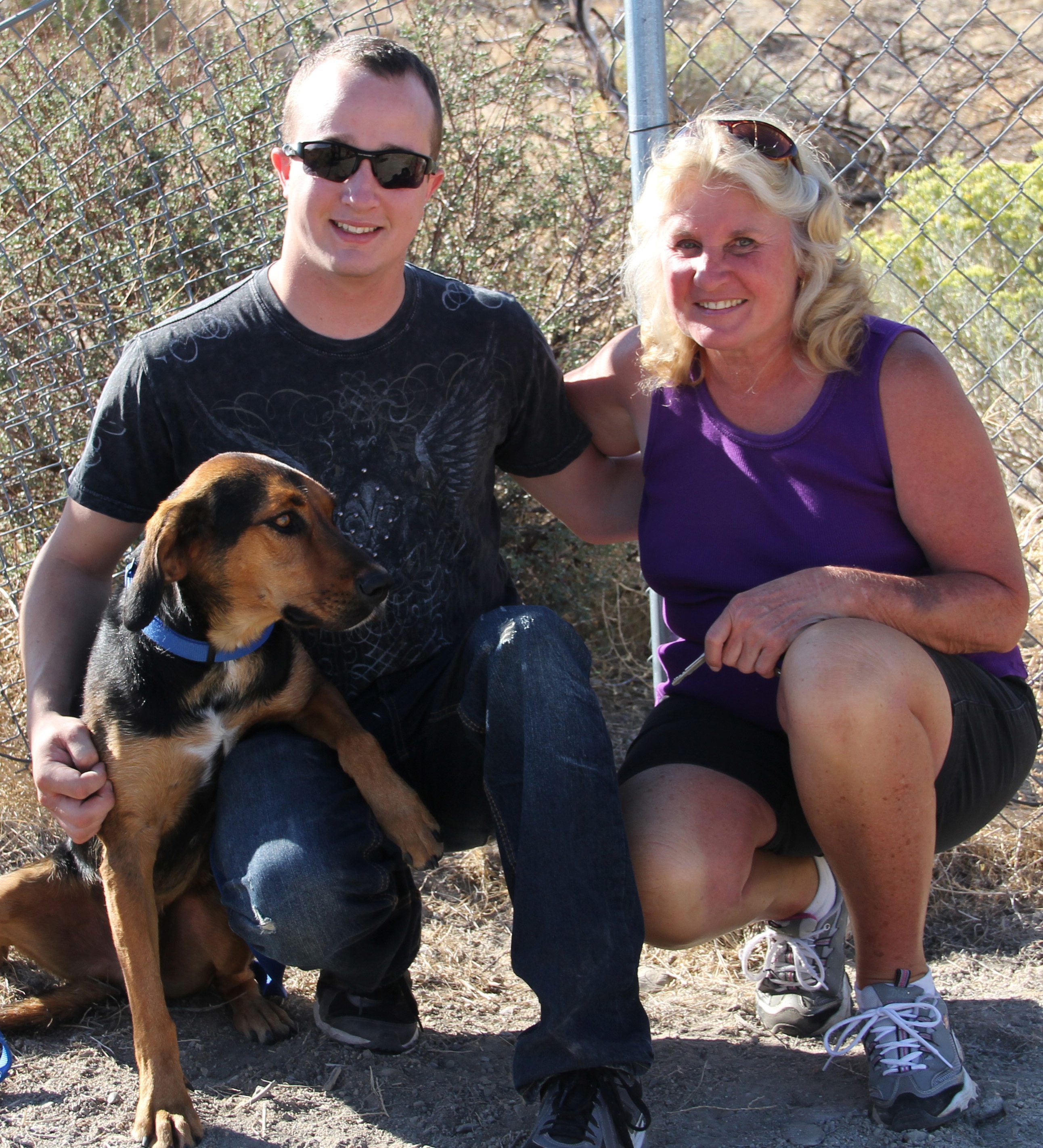 Hudson, Wes Falconer and Kathie Mead right next to the spot off Robb Drive and the I-80 where Hudson was rescued.

“Without Mrs. Mead, we probably could never have rescued this dog. I think of her as a lifesaver.”
-ASA Tim Finnegan, Washoe County Regional Animal Services

Because Kathie Mead of Verdi went out of her way to help a stray, an injured National Guardsman is back together with his long-lost companion dog.

Senior Airman Wes Falconer was on his way home to Reno after being injured while on duty in Afghanistan when he adopted Hudson the hound from Sammie’s Friends Animal Shelter in Grass Valley, California.

Falconer was encouraged to adopt a companion dog by doctors who said a dog could help with his recovery. Falconer said he was also inspired by memories of a “really cool” bomb dog that worked with security forces when he was overseas. When the staff at Sammie’s Friends heard Falconer’s story, they decided to waive all adoption fees to show their appreciation for Falconer’s service to the Country.

In late April, Falconer was at Travis Air Force Base in California as part of his recovery. Friends were keeping an eye on Hudson in his absence but a utility crew accidentally left a gate open allowing Hudson to wander away from their west Reno home.

For months, Hudson roamed the rugged hills alongside the I-80 Freeway between Peavine and the Truckee River.

Falconer had posted “Lost Dog” signs and received messages from people who had spotted Hudson, but he could never catch up with the now overly-cautious canine. His parents also thought they saw Hudson one day while driving eastbound on the freeway but were unable to get a closer look.

All this time, Washoe County Regional Animal Services was also actively searching for Hudson, having received numerous calls reporting a stray dog in the area of Robb Drive and the I-80.

It was beginning to look like Hudson was un-catchable.

Enter Kathie Mead of Verdi. She first saw Hudson behind a fence along the freeway’s Robb Drive exit while driving her grandson to school.

“The dog looked like it needed help but would not let me get anywhere near to him,” Mead said. “Still, I felt that I had to do something.”

Mead began visiting the Robb Drive location several times a day. Leaving food and water for the stray and trying to keep an eye on its well-being.

“I checked on him several times a day. The dog would take the food, but was extremely skittish. I knew I could never get close enough to catch it,” Mead said.

Mead called Regional Animal Services. Animal Services Assistant Tim Finnegan explained that the only chance they might have to humanely rescue the dog would be to lure it into a cage. However, Finnegan was hesitant to use that method unless there was someone available to watch the cage.

“With the extreme temperatures and likelihood of over exposure, I was concerned we’d end up seriously harming the dog if it became trapped in an unattended cage,” Finnegan said.

Mead understood the dilemma. Without hesitation she volunteered to watch the cage and notify Animal Services immediately if the dog took the bait.

Mead and Finnegan met at the Robb Drive off ramp at 9:00 a.m. on Saturday, September 8. Finnegan set up the cage at the spot where Mead had been feeding the dog daily.

Based on the dog’s habits, Finnegan told Mead he had a hunch her vigil would be over by early afternoon.

The dog arrived before noon. Mead said she held her breath for what felt like an eternity as it slowly approached the cage and then finally went in for the food. She let out a huge sigh of relief and contacted Animal Services as soon as the cage door closed.

Because the dog had a microchip, Finnegan had no trouble finding the owners.

Falconer and his parents were reunited at the Regional Animals Services facility by 2:00 p.m. that afternoon. Animal Services Kennel Caretaker Heather Hart brought Hudson to the lobby for the reunion with his family.

The following Saturday, Hudson, Airman Falconer and his parents Mark and Gail met with ASA Finnegan and Kathie Mead at the Robb Drive off ramp where Hudson was rescued to celebrate the happy reunion.

There were plenty of hugs and smiles, plenty of tail wagging and an overall sense that there is still plenty of good in this world.

A much healthier Hudson looked on as the folks around him related their individual stories from his four-month adventure and marveled at the good fortune, and good people, who worked together to bring the dog safely home.

“I think you definitely have a guardian angel,” Falconer said kneeling down to get a hug from Hudson.

Looking around at the people gathered along the road side on a Saturday morning to share the hound’s good fortune, Mead replied,