Heller gets national, local Chamber endorsement as Berkley touts her own business support 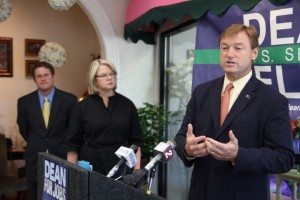 U.S. Sen. Dean Heller, R-Nev., showed up at a Sparks floral shop today to receive the endorsement of the U.S. Chamber of Commerce in his reelection bid against Rep. Shelley Berkley, D-Nev.

The national endorsement was made by former U.S. Secretary of Education Margaret Spellings, who said the choice was clear for the organization.

“This is a time, as you all know, of great contrast in politics,” said Spellings, president of the U.S. Chamber’s Forum for Policy Innovation. “These are not close calls; these are not tough calls, these endorsements. People who support business do so proudly and we are proud and honored to support them. While a lot of people talk a good game, it’s pretty easy to decide who is pro-business around here.”

Spellings, who served as U.S. Secretary of Education from 2005 to 2009, said Heller’s leadership on pro-growth policies, including American energy production, removing regulatory barriers for small business growth and reining in government spending, is what will get the nation’s economy back on track.

The Berkley campaign at the same time announced support from business leaders for her Senate campaign, including Republican businesswoman Maggie Arias Petrel of Las Vegas.

“Shelley has consistently supported small businesses in our community by voting for legislation like the Small Business Jobs Act, which provided incentives to get small businesses to start hiring again,” Petrel said in a release from the campaign. “We need Shelley to keep fighting for Nevada businesses in the years to come as a U.S. Senator.”

The Chamber of Reno, Sparks and Northern Nevada announced its endorsement of Heller at the same time at the Sparks Florist, despite not having interviewed Berkley first.

Tray Abney, director of government affairs for the regional chamber, representing 2,500 member businesses, said the group decided to endorse Heller because of his past support for pro-business policies. The chamber had expected Berkley to speak to the group during the August recess but had not heard from her through today, he said.

Berkley’s vote for the Affordable Care Act, for example, will lead to increased health insurance costs for small business, he said.

Heller took the opportunity to criticize Berkley for voting for “cap and trade,” which he said would cost 50,000 jobs in Nevada.

The American Clean Energy and Security Act would allow the government to set a cap on the total amount of greenhouse gases that could be emitted nationally. Companies would then buy or sell permits to emit the gases, primarily carbon dioxide.

“In this Congressional District here, I knew we would lose 15,000 jobs and for that reason I voted against it,” Heller said. “Who in their right mind in Washington, DC, believes, that when presented an option of actually voting against your own constituents, losing jobs in this economy, would actually vote for it.”

He also criticized Berkley for her support of President Obama’s proposal to end the Bush tax cuts for individuals making $200,000 or more and couples making $250,000 or more.

Pam Drum, executive director of the Washoe County Democratic Party, offered a different perspective, saying Berkley has been a friend to business throughout her political career.

“One good example is the Small Business Jobs Act of 2010,” she said. “It created $30 billion in capital for community banks to lend to small businesses to help them grow and create jobs. Republican Governor Brian Sandoval applauded the bill saying it would help create jobs in Nevada.”

Heller voted against the measure, calling it “another bank bailout.”

But so did then-Rep. Dina Titus, D-Nev., who lost to Rep. Joe Heck, R-Nev., in the 2010 general election. Titus told the Nevada NewsMakers television show in April 2012 that she too was concerned it was a bank bailout. Titus is now running for the 1st Congressional seat in Las Vegas.

The Wall Street Journal reported in March 2011 that critics of the fund said some banks were applying for money to refinance outstanding government debt rather than to boost their small-business lending.

Drum said the chamber “perhaps” could have done more research before making the endorsement.

“Shelley Berkley has always been a strong supporter of small businesses,” she said. “The choice really is very clear. Shelley supports giving small businesses the tools they need to grow and prosper and create jobs here in the United States. Dean Heller continues to support tax breaks for corporations so they can ship their jobs over seas and he continues to support tax breaks for big oil companies.”