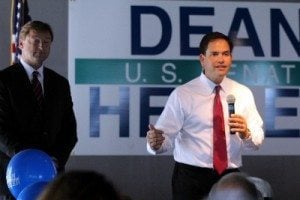 Rubio, who earlier in the day held a rally with Heller in Las Vegas, toured a local business, the Great Basin Brewing Company, before arriving at Mambo’s next to the Atlantis hotel-casino.

Several hundred supporters turned out for the Reno event.

In brief remarks, Rubio talked about growing up in Las Vegas and how the hotel-casino jobs held by his parents helped the family live the “American dream.” Rubio spent seven years in Las Vegas and attended elementary school there.

His dad was a bartender and his mom was a maid, and they had jobs because someone with money built a hotel in Las Vegas, he said.

“And every two weeks my parents cashed a paycheck,” Rubio said. “They were never rich, but they lived the American dream, because they were able to give us the chance to do all the things they never had a chance to do. Because all the doors that had been closed for them, opened for us.”

Rubio said President Obama’s ideas of big government are the same that have “kept people in poverty for centuries.”

The Las Vegas Review-Journal reported that in addition to the Las Vegas rally, Heller and Rubio met with Sheldon Adelson and held a fundraising event that brought in close to $200,000.

Heller’s Democratic opponent, Rep. Shelley Berkley, D-Nev., was in Northern Nevada today as well, continuing a tour of the state to criticize what she called “the Heller-Ryan-Romney plan to end Medicare as we know it.”

Berkley held events in both Carson City and Fallon.

Heller said he was “proud” to be the only member of Congress to be able to vote twice for the plan to turn Medicare over to “profit-hungry private insurance companies,” Berkley said in a statement.

“Their plan would put insurance company bureaucrats between patients and their doctors while raising premiums by $6,000 a year,” she said. “Nevadans cannot afford the Heller-Ryan-Romney plan to undermine the benefits they are depending on to be there when they retire. I’ll continue to fight each and every day to ensure Medicare’s guaranteed benefits are there for Nevadans for generations to come.”