By ThisIsReno August 20, 2012
tudents enjoy the use of the latest technologies in the newly renovated Newsroom at the Donald W. Reynolds School of Journalism and Center for Advanced Media Studies at the University of Nevada, Reno. Photo courtesy of Jeff Dow Photography. 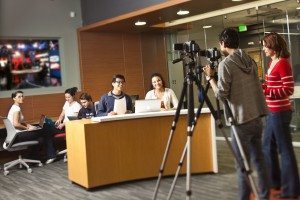 Students enjoy the use of the latest technologies in the newly renovated Newsroom at the Donald W. Reynolds School of Journalism and Center for Advanced Media Studies at the University of Nevada, Reno. Photo courtesy of Jeff Dow Photography.

Tomorrow afternoon, members of the media, donors and supporters of the Donald W. Reynolds School of Journalism and Center for Advanced Media Studies will have the opportunity to see the recently completed renovation of the building at an invitation-only rededication ceremony in the building’s Ted Scripps Atrium at 4 p.m., followed by tours and demonstrations throughout the building.

Over the past 18 months, the building has undergone substantial improvements that enhance the School’s multimedia, broadcast and digital technology capabilities, while retaining the building’s warm, traditional characteristics. The new technological infrastructure further strengthens the School’s ability to educate multiplatform professionals trained in the essentials and ethics of journalism and strategic communication.

“We now have the best of both worlds,” said Reynolds School of Journalism Dean Al Stavitsky. “Not only did the building improvements create more public spaces for interaction to enhance our School’s wonderful sense of community, but we also now have the leading-edge technology our students need to innovate and to succeed in this digital age.”

The improvements in technology are evident as soon as you enter the building, with a huge, high-definition video screen that has replaced the large, old printing press in the Atrium. Nearby is a new, interactive, touch-screen information kiosk, with retrievable alumni features, maps, directory information and digitized graduation photos. A new showcase provides a place to exhibit projects and awards of the school’s students and alumni, such as the six Pulitzer Prizes garnered by alumni.

Just off the Atrium is the new Graduate Studies Suite, in a room once planned to house a dark room for photograph development. It is equipped with a flat-screen video screen, computers, white writing wall for group collaboration, student lockers and more. The Travis B. Linn Reading Room, just across the hall, still has the warmth of its brick walls and hearth, but now also houses a high-definition screen, with capability of laptop attachment for group presentations.

Perhaps at the center of the remodel is the Multimedia Newsroom, along with the accompanying Audio Control Room, Audio Studio and Clarence and Martha Jones Production Control. In the Newsroom, an anchor desk, studio lighting, a ceiling-mounted sky camera, edit bays and workstations allow students to work together in a connected environment very similar to many media newsrooms today. In fact, the Newsroom will allow the students to use Associated Press systems for workflow and news management.

“Students will produce news for print, online and broadcast from this room because that’s journalism today,” said Rosemary McCarthy, assistant professor at the School who also assumed the role of managing the massive remodel. “Our students must be prepared to work across media now – the lines are blurred, and this renovation accommodates and reflects that.”

The Audio Studio can also serve as a video-editing area and can connect with an adjacent room for “town hall meeting” broadcast segments. The Broadcast Systems Room serves as an audio-visual hub with computers and specialized systems for controlling the newly added digital screens in the public areas and supporting the new screens in the conference rooms, labs and classrooms. It also serves as the broadcast system hub, from which television cameras, teleprompters, microphones and recorders throughout the building are driven.

“These rooms and technologies won’t just be used by broadcast and news journalists,” explained McCarthy. “They will also be used by students practicing pitches for public relations, advertising and marketing presentations. They will be able to tape their presentations and watch and critique themselves, and they need to be able to use this technology in their fields as well.”

Students, faculty and administrators of the School, the University, and the University of Nevada, Reno Foundation will host the rededication event for the building tomorrow. Presenters will include University President Marc Johnson; Reynolds School of Journalism Dean Al Stavitsky; Fred W. Smith, chairman of the Donald W. Reynolds Foundation; and Jason Geddes, chairman of the Nevada System of Higher Education Board of Regents.