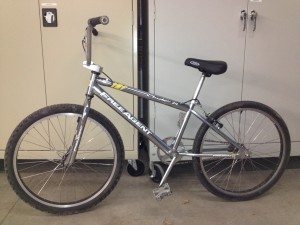 Detectives from the Washoe County Sheriff’s Office are asking for assistance from the public in locating a suspect wanted for the robbery of a Save Mart Store near Eagle Canyon and Pyramid Way in Spanish Springs during the morning of Thursday, August 30, 2012.

The suspect was completely dressed in black and his face was covered by a hood. He is described as a male, approximately 5’ 11” and 200 pounds.

Detectives located a bicycle believed to be used by the suspect near the crime scene. The bike is described at a Free Agent Eluder with 24 inch rims, silver in color, black rims, and a sticker on the handlebars. Any information from the public related to the bicycle may prove useful in locating the suspect. A photograph of the bike and surveillance video have been included in the press release, and media is encouraged to display for their viewers/readers.