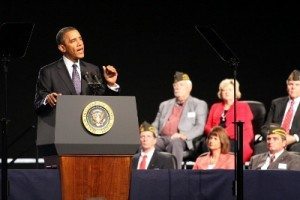 President Barack Obama told members of the Veterans of Foreign Wars today that he has fulfilled the promises he made four years ago to make America safer, strengthen jobs programs for returning military personnel and fight homelessness, suicide and post-traumatic stress disorder among the nation’s veterans.

Obama, appearing at the 113th convention of the group, acknowledged in a 30-minute speech that more needs to be done to help returning military personnel find jobs. He took the opportunity to announce a major overhaul of the transition assistance program.

“We’re going to set up a kind of reverse boot camp for our departing service members,” he said. “Starting this year, they will get more personalized assistance as they plan their careers. We’ll provide the training they need to find that job, or pursue that education or start that business. And just as they have maintained their military readiness, we’ll have new standards of career readiness.”

He also urged Congress to find a solution to the nation’s deficit spending to protect the military budget from automatic cuts set to take effect next year without an agreement.

“Because people in Congress ought to be able to come together and agree on a plan, a balanced approach that reduces the deficit and keeps our military strong,” Obama said. “It should be done.

“If the choice is between tax cuts that the wealthiest Americans don’t need and funding (for) our troops that they definitely need to keep our country strong, I will stand with our troops every single time,” he said. “So let’s stop playing politics with our military.”

Obama said he promised four years ago to “take the fight to our enemies and renew our leadership in the world.”

“As president, that’s what I’ve done,” he said.

Not only did his administration kill Osama bin Laden, but it has also taken out more top al-Qaeda leaders than at any time since 9-11, Obama said.

Obama also highlighted his decision to withdraw troops from Iraq in what he said was a responsible manner, and the administration plan now under way to withdraw all U.S. military from Afghanistan, completing a transition to Afghan military control by 2014.

Obama received a number of cheers and applause from the crowd of men and women, some young and others veterans of World War II, Vietnam and Korea, among other conflicts.

He took a few minutes at the beginning of his remarks to talk about those with military connections who were victims of the Aurora, Colo., shooting rampage Friday, including Jonathan Blunk, a 2004 graduate of Hug High and a Navy veteran.

His appearance, the second visit to Reno this year, will be followed tomorrow by remarks from Mitt Romney, his presumed GOP rival in the November general election.

Romney has attacked Obama’s record on the military. On his website, he says, “President Obama came into office with a military in serious need of modernization. However, instead of rebuilding our strength, President Obama has put us on course toward a ‘hollow’ force. President Obama has repeatedly sought to slash funds for our fighting men and women, and over the next ten years nearly $1 trillion will be cut from the core defense budget. This budget cutting enterprise is proceeding while American troops are in combat in Afghanistan, returning from their mission in Iraq and fighting the remnants of al-Qaeda worldwide.”

In a response to Obama’s remarks, Romney campaign spokesman Mason Harrison said, “In no region of the world is our country’s influence any stronger than it was four years ago. President Obama has failed to restore our economy, is weakening our military with devastating defense cuts and has diminished our moral authority. Governor Romney will restore the pillars of American strength to secure our interests and defend our values.”

Obama’s Nevada visit focused on his record of accomplishments in the military and veterans arenas but still brought him to a battleground state viewed as critical by political observers for victory by the candidates in November.

He won Nevada in 2008, but with the highest unemployment rate and one of the highest home foreclosure rates in the nation, the state is considered to be a toss up. Washoe County in particular is viewed as critical to which candidate will win the state’s six electoral votes.