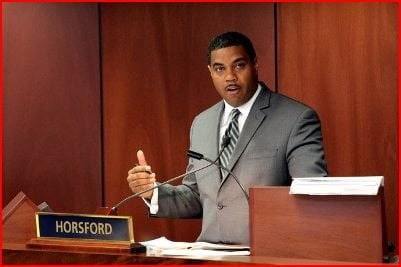 By the Nevada News Bureau

Horsford, who is running in the new district that encompasses parts of North Las Vegas as well as some rural areas in southern Nevada, said he would have voted for the Affordable Care Act (ACA), adding that he believes it is important for the betterment of the country.

“Thirty percent of Nevadans are uninsured. Most of them are children,” said Horsford. “All of us as taxpayers pay for people who end up going into the emergency room and receiving care through uncompensated care.”

Horsford, interviewed on Jon Ralston’s television program Face to Face last Thursday, said he supports the measure including insuring people with pre-existing conditions, helping students and young people stay on their parents insurance and helping seniors afford the cost of their medications.

Horsford declined to call the ACA’s tax penalty a tax, though, as the U.S. Supreme Court did in its decision.

“It’s a penalty for those who fail to get insurance,” said Horsford.

Horsford also said he had talked to a small business owner in his district who is benefitting because he is now going to be able to afford health care coverage for employees.

Regarding the debate over whether Nevada should expand its Medicaid program under ACA, Horsford agreed it will undercut a key part of the bill if Nevada does not opt in to the expansion.

Horsford pointed out that the first three years’ costs for the benefits under a Medicaid expansion would be paid for by the federal government and asked about Nevada’s participation, “Why wouldn’t we?”

Horsford also echoed familiar Democratic talking points about standing with the middle class against obstructionist Republicans who represent only the wealthy.

When presented with a video clip of his opponent Danny Tarkanian saying he expected that Horsford would engage in class warfare in his congressional campaign, Horsford called Tarkanian “a self-proclaimed crazy radical” and said that Tarkanian was endorsed by the Palin family.