Think you know your candidate? Find out at prezdebate.com 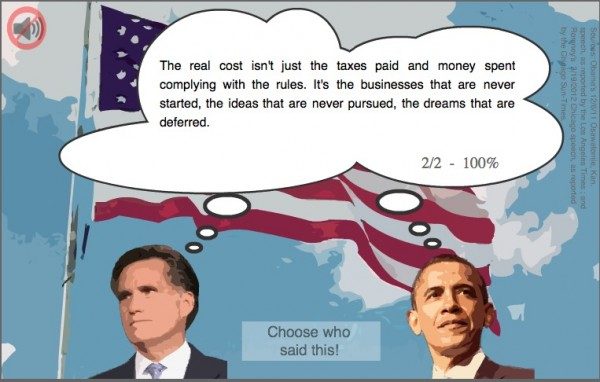 Two University of Nevada, Reno professors have developed a website and a game application for iPhones that allows users to test their knowledge of President Barack Obama and presidential candidate Mitt Romney.

Available at www.prezdebate.com and at the iTunes store by searching for the app Prez Debate, the game presents random quotes and users choose which candidate they think said them. Users are told if they “chose wisely” or “chose poorly” after each question and are given their correct number of answers after each set of five quotes.

The professors who collaborated on the project, Larry Dailey and Sushil Louis, look at their work as play and are firm believers that people learn best when they are “at play.” Dailey, who wrote the website and app, is a professor and the Reynolds Chair of Media Technology in the Donald W. Reynolds School of Journalism. Louis, who came up with the idea, is a computer science and engineering professor in the College of Engineering. Despite being in what are considered two very different disciplines, the two share a warm friendship, philosophy on learning and common approach to their work as educators.

“People fundamentally learn through play and by doing. When you’re at play, your mind puts things together that it ordinarily wouldn’t,” Louis, whose courses include computer game design and artificial intelligence, said. “I want to use the addictive power of games to teach things that are difficult to learn, to get children addicted to math and science games the way they get addicted to other games.”

“The most difficult things you did and learned were as a child, and you thought you were playing when you did them and learned them,” Dailey added.

The two also share a disdain for what they think is the media’s tendency to try to emphasize conflict. Instead, they aim to help people come to a better understanding.

“We wanted to bring something to the table that was just as engaging as conflict, that is pure learning,” Dailey said. “As an instructor at a land-grant institution and as a journalist, my missions are really the same – to get knowledge out to the average person and to help people understand their world. By increasing understanding, we hope to help get people moving forward together.”

The website and the app, available free from iTunes, contain 100 quotes, 50 from an Obama speech in Osawatomie, Kan. last December and 50 from a Romney speech in Chicago last March. They rotate randomly, in no specific order.

The Prez Debate game is not the first project the two friends and colleagues have worked on together. They also previously created and developed a game where users guess whether quotes are from the Old Testament of the Bible or from the Quran. It contains a few thousand quotes and is based on the same type of software as the Prez Debate game. It can be accessed at http://verity.cse.unr.edu.