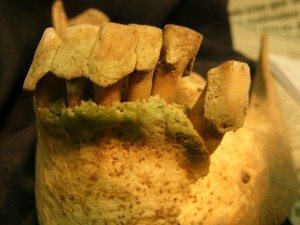 While we may brush and floss tirelessly and our dentists may regularly scrape and pick at our teeth to minimize the formation of plaque known as tartar or dental calculus, anthropologists may be rejoicing at the fact that past civilizations were not so careful with their dental hygiene.

University of Nevada, Reno researchers G. Richard Scott and Simon R. Poulson discovered that very small particles of plaque removed from the teeth of ancient populations may provide good clues about their diets. Scott is chair and associate professor of anthropology in the College of Liberal Arts. Poulson is research professor of geological sciences in the Mackay School of Earth Sciences and Engineering.

Scott obtained samples of dental calculus from 58 skeletons buried in the Cathedral of Santa Maria in northern Spain dating from the 11th to 19th centuries to conduct research on the diet of this ancient population. After his first methodology met with mixed results, he decided to send five samples of dental calculus to Poulson at the University’s Stable Isotope Lab, in the off chance they might contain enough carbon and nitrogen to allow them to estimate stable isotope ratios.

“It’s chemistry and is pretty complex,” Scott explained. “But basically, since only protein has nitrogen, the more nitrogen that is present, the more animal products were consumed as part of the diet. Carbon provides information on the types of plants consumed.”

Scott said that once at the lab, the material was crushed, and then an instrument called a mass spectrometer was used to obtain stable carbon and nitrogen isotope ratios.

“It was a long shot,” he said. “No one really thought there would be enough carbon and nitrogen in these tiny, 5- to 10-milligram samples to be measurable, but Dr. Poulson’s work revealed there was. The lab results yielded stable carbon and nitrogen isotope ratios very similar to studies that used bone collagen, which is the typical material used for this type of analysis.”

Scott explained that the common practice of using bone to conduct such research is cumbersome and expensive, requiring several acid baths to extract the collagen for analysis. The process also destroys bone, so in many instances, it isn’t permitted by museum curators.

As for using hair, muscle and nails for such research, Scott said, “They are great, when you can find them. The problem is, they just don’t hold up very well. They decompose too quickly. Dental calculus, for better or for worse, stays around a very long time.”

Scott said that although additional work is necessary to firmly establish this new method of using dental calculus for paleodietary research, the results of this initial study indicate it holds great potential.

“This is groundbreaking work,” Scott said. “It could save a lot of time and effort, and also allow for analysis when things like hair, muscle and nails are no longer available.”

The study, “Stable carbon and nitrogen isotopes of human dental calculus: a potentially new non-destructive proxy for paleodietary analysis,” is published in the May 2012 issue of the Journal of Archaeological Science.