By Sean Whaley, Nevada News Bureau: Nevada’s polices of low taxes and small government ranked it 18th among states in its ability to compete and grow its economy, according to a report released today by the American Legislative Exchange Council (ALEC).

Called “Rich States, Poor States,” the fifth edition of the report ranks the states based on their economic policies and examines which states are taking the right corrective actions to emerge from the current economic downturn. 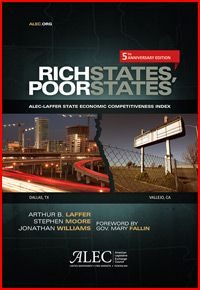 Nevada’s No 1 ranking among states for having no personal or corporate income tax are two reasons why the state’s economic outlook is so favorable.

Nevada’s ranking has slipped, however, in the past few years that ALEC has released the report, from 7th in 2008 and 2009 to 11th in 2010 and 17th in 2011. The overall ranking is based on 15 state policy variables that the authors say drive competitiveness.

But economist Dr. Arthur Laffer, described as the father of supply side economics and one of the report’s co-authors, praised Nevada’s efforts and the performance of Gov. Brian Sandoval.

“You are an extraordinarily competent state and you’ve got a great governor; Sandoval is just spectacular,” he said. “But I think you’ve had some tax increases in the last few years that have pushed you down a little bit.

“Do remember you are competing against some pretty good states,” Laffer said. “So I wouldn’t take the 18 as being a terrible ranking nor your drop as being terrible. The greatest blessing that has ever happened to Nevada is being next to California.”

The report shows that Nevada, Texas and Arizona are benefiting from California’s 38th spot in the rankings.

The report says California has lost 2,500 employers and 109,000 jobs because of relocation over the past four years.

A chart in the report on population changes “is a stunning picture that encapsulates the consequences of the policy implosion in California,” the report said. “It also shows us that the states with the largest inflows bordered California, which had one of the largest outflows of all 50 states.”

Nevada ranked sixth among states for population gain from 2001 to 2010, while Arizona ranked 3rd. California ranked 49th and actually lost population during the period.

“I used to describe California as a supernova, sending off solar systems of economics to the neighboring states,” Laffer said.

In a statement in response to the report, Sandoval said: “There’s no arguing Nevada has been hit hard by the great recession, but things are beginning to look up. We are beginning to see signs of economic recovery, with job growth in important sectors and steady increases in state revenue collections, but it’s important that we maintain our momentum by reducing the regulatory burden, keeping taxes as low as possible, and improving government efficiencies.”

Other favorable factors are Nevada’s No. 1 ranking for the fewest public employees at 422.1 per 10,000 of population, and Nevada’s status as a right-to-work state.

The Nevada Legislature and Sandoval agreed in 2011 to extend a package of tax hikes that were set to expire to help balance the budget without further spending cuts. Sandoval recently announced he plans to extend the package for another two years beginning July 1, 2013, to avoid further cuts to education.

In a conference call to discuss the report, Laffer and the other authors, Stephen Moore of The Wall Street Journal, Jonathan Williams, director of ALEC’s Center for State Fiscal Reform, and Indiana state Sen. Jim Buck, ALEC’s tax and fiscal policy task force chairman, offered their thoughts on which states are making the right choices and those that are heading down the wrong path.

“One of the great, understated facts of state policy is that states do not enact policy changes in a vacuum,” the report said. “When a state changes policy, for better or for worse, it immediately affects its competitiveness.”

Utah was first in the report. New York was 50th.

One point noted by the report’s authors is the need for states to make meaningful reforms to their public employee pension plans, as both Utah and Rhode Island have done.

Pension reform is not a partisan issue, he said.

ALEC is the largest nonpartisan organization of state Legislatures, focusing on the principles of low taxes, limited government, individual liberty and federalism.