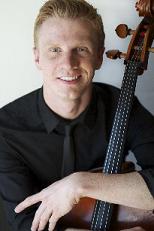 The Reno Chamber Orchestra, Maestro Theodore Kuchar, the UNR Chamber Singers, and cellist Matthew Linaman are all featured in the final concerts of the RCO’s 2011-12 season this Saturday, April 14, at 8:00 p.m. and Sunday, April 15, at 2:00 p.m. at UNR’s Nightingale Concert Hall.

Matthew Linaman, the winner of the Reno Chamber Orchestra’s 23rd annual College Concerto Competition, will perform Haydn’s Cello Concerto in C major. Mr. Linaman was the subject of an article by Geralda Miller in the Reno Gazette-Journal this weekend, now available online.

You can find out more about this composition in the RCO’s first-ever podcast, hosted by the RCO’s Chris Morrison and available at the RCO website’s April 14/15 concert page or Audio page.

Opening the concert will be the Fuga con Pajarillo by Venezuelan composer Aldemaro Romero. Watch a YouTube performance of the piece here.

You can purchase tickets for Saturday’s or Sunday’s concerts online, or by calling the RCO at (775) 348-9413. Read program notes and find out more about the performances at the RCO website.

Maestro Kuchar and Dr. Torkelson will talk about the concert and the featured music in pre-concert talks that begin 50 minutes before each performance inside Nightingale Concert Hall.