SUBMITTED BY THE NEVADA REVIEW 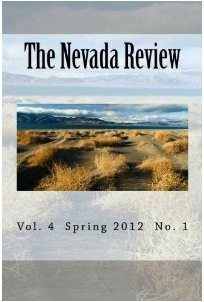 The editors of The Nevada Review have announced that the latest issue is now available.  Volume 4, Number 1 (Spring 2012), is the sixth volume to be published since the journal started in October of 2009, and represents a continuation of its mission of providing a space for new and known Nevada voices.  You can take a look at more information here, and find it in stores soon.

This issue, like the five previous, is complete with fiction, nonfiction, reviews and an interview, all set in or about the state of Nevada.  Items in this issue come from all over the state, examine how Nevada is represented beyond its borders, the state’s policy history and more.  Also like the previous five issues, they believe that you will find this to be a significant contribution to the landscape of Nevada literature.

The Nevada Review is a journal dedicated to Nevada: it aims to enhance understanding of the state as a geographical, social and political unit and a microcosm of the West in the broader historical and political development of the United States. Recognizing the distinctive geological, environmental, social and ethnographic characteristics of Nevada, the Review seeks contributions that examine these features and investigate how they have contributed to the shape of its political institutions, demographic profile and cultural mores. To this end, the Review encompasses studies from a broad range of disciplines and perspectives, including, but not limited to, history, political science, economics and literary criticism and also accepts literary contributions of short fiction that concern Nevada, its people and their way of life.