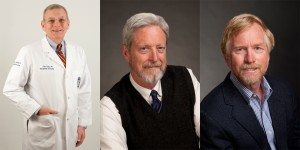 The recipients will be honored May 16 during the University’s annual Honor the Best ceremony at 3 p.m. in the ballroom of the Joe Crowley Student Union on the Reno campus.

Recipients will receive a $5,000 annual stipend for three years to further their professional endeavors. Their names will also be engraved in the granite pillars of the University’s Honor Court. Candidates are nominated by their deans, and funding is provided by the University of Nevada, Reno Foundation.

Dr. John Fildes joined the University of Nevada School of Medicine in 1996, where he is professor and vice-chair of the Department of Surgery and program director of general surgery and surgical critical care. He is also the medical director and chair of the Department of Trauma and Surgical Critical Care at University Medical Center, the county-operated trauma center in Las Vegas. He has served as the National Chair of Trauma for the American College of Surgeons.

Fildes has received numerous awards and honors, including the White House Medical Unit Certificate of Appreciation in 1998 and the Las Vegas Chamber of Commerce’s Community Achievement Award in 1998. He was also named the 2006 Physician of the Year by the Nevada State Medical Association.

“Dr. Fildes is an accomplished surgeon and scientist, but above all else he is an outstanding educator and mentor,” said Thomas Schwenk, dean of the School of Medicine. “His performance sets the standard for our entire clinical faculty. His teaching is the reason, in part, that the Department of Surgery has consistently received the award for teaching excellence from graduating medical students.”

Fildes has brought 23 research and training grants to the School of Medicine totaling $13 million, and he was the first clinical faculty member to receive a grant award over $1 million, which was quickly followed by a $7.5 million research award to support the development of new technologies to deliver high-speed blood transfusions to the battlefield.

Gary Haynes is a professor in the University’s Department of Anthropology and was the department chair from 1998 to 2004. He has been awarded multiple research grants from the National Science Foundation, the National Geographic Society, the Fulbright Scholar Program, the Wenner-Gren Foundation for Anthropological Research and The Leakey Foundation, among others. Haynes, who joined the University in 1985, has been recognized by the College of Liberal Arts with the Dean’s Award for Teaching and the Dr. Donald Mousel and Dr. William Feltner Annual Award for Excellence in Research and Creative Activity.

Haynes’ work has encompassed three major research themes: the relative effects of humans and climate upon large-mammal species during the late Ice Age, the initial peopling of North America over 13,000 years ago, and the prehistory of the largest national park in Zimbabwe, southern Africa.

“Professor Haynes has earned an international reputation for scholarship of the highest caliber,” said Scott Casper, interim dean of the College of Liberal Arts. “He deserves recognition also for his deep, productive involvement with students over three decades at Nevada. He has mentored many students who did not work in his own field of Pleistocene archeology—a substantial, unselfish commitment of time and energy.

“This recognition is many years in the making, and some would say overdue,” Casper said.

Scott Tyler is the director of the Center for Transformative Environmental Monitoring Programs, based in the University’s College of Science and funded through the National Science Foundation. He is a professor in the Department of Geological Science and Engineering and an affiliate faculty member in the Department of Civil and Environmental Engineering. Tyler is the former director of the University’s nationally recognized Graduate Program of Hydrologic Sciences.

Tyler, who has published more than 80 peer-reviewed manuscripts and book chapters, has been recognized for innovations in the study of hydrologic systems and the application of temperature-sensing equipment in environments ranging from the high deserts of Nevada to Antarctica. In addition, Tyler has served as editor of the American Geophysical Union’s professional journal, Water Resources Research, on review panels of the National Academy of Science, and as a chairman of national-level committees and divisions.

“Dr. Tyler has amassed a considerable body of work and has attained international prominence for his research within the hydrologic sciences community,” said Jeff Thompson, dean of the College of Science. “However, the greatest accomplishment of Dr. Tyler may be that he is able to pass along his considerable knowledge to students, and he has done so successfully with nine doctoral and 16 master’s degree students, continuing his knowledge to the next generation.”