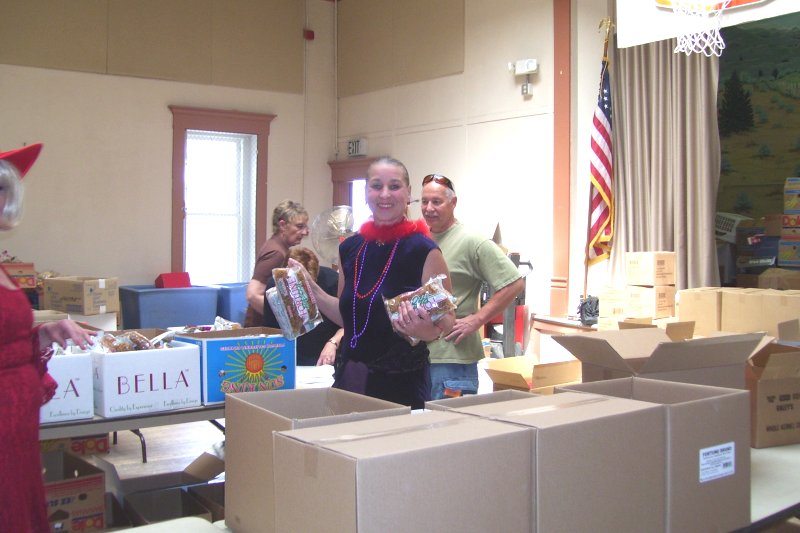 Mary Piper, coordinator for the local challenge, explained, “The Feinstein Challenge is a win-win situation. If groups or individuals donate non-perishable food items or money to Dayton food pantry in March and April, the Feinstein Foundation will add funds. The more donations we receive, the larger our slice of the pie will be.”

Schools, clubs, Sheriff’s Department and businesses all pitch in
All of the schools and the Boys and Girls Club sites in Dayton have joined the challenge. As always, many businesses and community groups are also helping. Lyon Sheriff’s Department will be hosting a “Stuff a Cop Car With Food” day on April 7 at Smith’s Grocery parking lot on Highway 50 (time to be announced). Curves Health Club of Dayton is having a “give a bag of groceries, join for free” special for the Feinstein Challenge, and Pioneer Crossing is again offering specials related to the food drive.

Where can people donate?
Donations of non-perishable food, cash, checks and pledges received from March 1 to April 30 will be counted for the Feinstein Challenge. Look for conveniently located “Feinstein Challenge” donation barrels, boxes or front office donation envelopes at most businesses and offices in Dayton, or drop donations at the Dayton food pantry at 4 Enterprise Way and Hwy 50 between 10 a.m. and 4 p.m. Monday through Friday.

What is the Feinstein Challenge? Alan Feinstein is a nationally known philanthropist and humanitarian whose past 14 challenges to fight hunger resulted in over $1 billion for thousands of agencies nationwide (feinsteinfoundation.org). Last year during the Feinstein Challenge, the Dayton pantry received $5,122.30 in cash and checks and 12,434 items of food, for a grand total of $17,556.