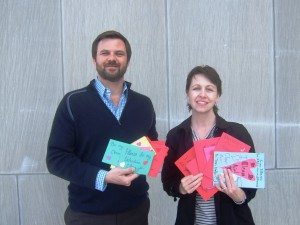 “If you love your kids, you’ve got to love clean air,” said Yvonne Kaeder, a mother from Las Vegas who helped her children, Ellianna, age 8, and Madden, 6, make Valentine’s Day cards for the senators.

Congress is currently considering several legislative proposals that would prevent the Environmental Protection Agency from protecting the public health with new clean air standards for toxic substances like mercury, arsenic, soot, smog, carbon and other pollutants.  The new standards would save thousands of lives each year.

Nevada Conservation League Executive Director Scot Rutledge noted that Heller has often supported the interests of polluters over those of Nevada’s citizens.

“This is our way of reminding the junior Senator from Nevada that our families need him to stand up for clean air,” Rutledge said. “And at the same time, we have to acknowledge the critical work done by Senator Reid in Congress to protect the EPA and clean-air laws.”

“We want Washington to put public health first and to not do the bidding of the polluters and their lobbyists,” Rutledge said. “The polluters want to dump unlimited amounts of industrial carbon pollution into the air and to continue to contaminate our air with mercury. We’d prefer they protect the air our children breathe.”

“We are learning a lot about the impact that pollution has on our health,” said Sara Meraz, an East Tech senior. “We can put that learning to work by supporting Clean Air laws and protecting our environment.”