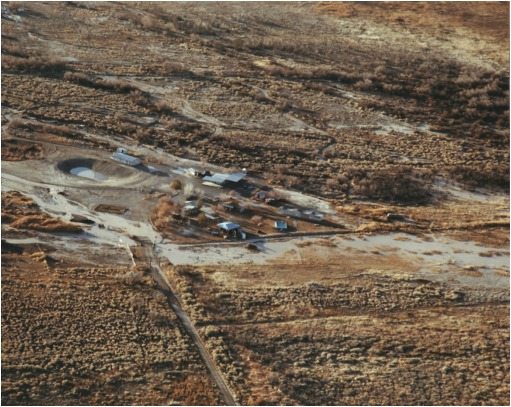 LAS VEGAS — The Center for Justice and Constitutional Litigation at the Nevada Policy Research Institute announced today that it will represent the Ministerio Roco Solida Church (Solid Rock Church), pastored by Victor Fuentes, and has filed a claim with the U.S. Fish and Wildlife Service for negligent and lawless actions by the agency that caused over $86,000 in damage to the church’s camp.

The camp, Patch of Heaven in the Amargosa Valley, suffered significant damage when a reckless U.S. Fish and Wildlife Service illegally rerouted two streams that have historically flowed through Patch of Heaven. Less than three weeks after the rerouting, the stream overflowed the poorly engineered new banks during rain showers and sent destructive floods of mud and muddy waters washing over and through the camp.

Ironically, Victor Fuentes had come to the United States to escape oppression by an unaccountable government. In 1991, he swam seven miles from near his home in Santiago, Cuba, to Guantanamo Bay and gained political asylum.

“I am an immigrant from Cuba who risked death to escape Castro’s regime, only now I am in a country overrun by a federal government that reminds me of the horrors from which I fled,” said Fuentes. “In Cuba, I had this beautiful image of America as a place of freedom and liberty, but after the U.S. Fish and Wildlife Service recklessly damaged our property through its irresponsible actions, that image has changed.”

“The U.S. Fish and Wildlife Service should immediately issue a check to the Ministerio Roco Solida Church to compensate the church for the damage it caused by its negligent actions,” said Joseph Becker, chief legal officer and director of CJCL.

This is the second case taken on by the Center for Justice and Constitutional Litigation, and Becker noted that the separation-of-powers concept is important in both cases.

“In November, CJCL filed a case against Sen. Mo Denis, the Public Utilities Commission and the State of Nevada, stressing the importance of the separation-of-powers principle in Nevada’s constitution,” Becker said. “What’s happened to Ministerio Roco Solida Church and Victor Fuentes at Patch of Heaven shows why we must continuously preserve the separation of powers in government.

“What’s happened at Patch of Heaven is the sort of tyrannical actions that emerge when you have a government agency — in this case the U.S. Fish and Wildlife Service — not only making the rules, but also administering them and then adjudicating the resultant disputes. There’s little to no accountability, and that must stop.”

The U.S. Fish and Wildlife Service has up to six months to respond to the claim filed by CJCL.

“In these types of situations — even when the government agency is clearly wrong — federal agencies often win by default, because private individuals are intimidated and unable to stand up to the federal government,” said Becker. “That’s not going to happen in this case.

“The Ministerio Roco Solida Church deserves to be fully and promptly compensated for the property damage caused by the negligent actions of the U.S. Fish and Wildlife Service.”

The Center for Justice and Constitutional Litigation is a public-interest law organization that litigates when necessary to protect the fundamental rights of individuals as set forth in the state and federal constitutions. Learn more about this claim at http://justice.npri.org/cases/justice-for-victor-fuentes/.

Fire restrictions on many public lands start this week