By Sean Whaley, Nevada News Bureau: Nevada is one of several states that will not make a Jan. 30 federal deadline to implement a newly mandated safety rule to ensure truck drivers have proof they are medically safe to drive, potentially putting federal highway dollars at risk.

The new rule from the Federal Motor Carrier Safety Administration (FMCS) requires state motor vehicle departments across the country to create a new database that will be linked nationally to keep track of the proof truck drivers need to show they are safe to drive. 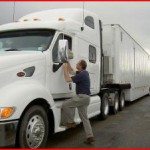 Courtesy of FEMA via Wikimedia Commons.

Failure to meet the deadline could potentially put 5 percent of a state’s federal highway funding at risk in the first year, and 10 percent thereafter. But states that move forward with a plan for implementation are expected to avoid any penalties if they complete the project by 2014.

Nevada Department of Transportation spokesman Scott Magruder said the state would be at risk for about $10 million in lost federal road funds if a 5 percent penalty was imposed.

Tom Jacobs, a spokesman for the Nevada Department of Motor Vehicles, said the agency is working to meet the new mandate but is not expected to do so until the end of 2013.

“We estimate this massive project will take an additional 2,500 computer programming hours to complete,” he said.

A spokeswoman for FMCS who spoke on background said penalties are not expected to be imposed right away. States not in compliance by Jan. 30 will get a letter informing them of their status, after which they will have through Sept. 30, 2013 to get their databases operational, she said.

After that point, penalties could be imposed, the spokeswoman said.

The FMCS plans to continue a current card-carrying requirement for truck drivers through Jan. 30, 2014.

The new rule was finalized on Jan. 30, 2009. Three states currently have their databases operational.

Nevada truck drivers are now required to carry medical cards on their persons to show proof of medical health to drive. The new database rule imposed by the federal government will replace the need for truck drivers to carry the cards.

While it may be a challenge for the Nevada DMV to implement, Paul Enos, chief executive officer of the Nevada Motor Transport Association, said the requirement is not viewed by the industry as an example of excessive regulation.

“Our guys are already required to carry medical cards,” he said. “They are required to have them with them all the time. Really I think where the hardship would be would be more with DMV and their programming and implementing it.

“They want to make sure that when you are driving an 80,000-pound vehicle that you are physically fit and able to do so,” Enos said. “So the thought would be, if they have this in a database, then everybody’s getting checked, it’s not just a spot check on the road or during a compliance review. And that would then eliminate the need for a driver to carry that card with them when they are on the road.”

Jacobs said the agency plans to use a federal grant worth a little over $400,000 to hire contract programmers to re-customize its database to comply with the new requirement. The grant is expected to cover the cost of the project but that remains undetermined at this point, he said.

Jacobs said the agency has every intention of making the extended deadline: “We can’t take the risk of losing federal dollars. Not at this point.”

DMV spokesman Tom Jacobs says the agency has a $400,000 federal grant to perform the required work:

Paul Enos of the Nevada Motor Transport Association says his industry does not have an issue with the new rule:

Enos says the new database will ensure all truckers are being checked: