BOOK REVIEW: Spin: How the news media misinform and why consumers misunderstand 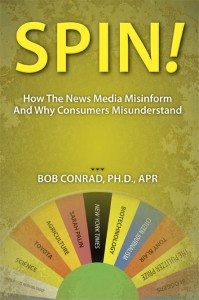 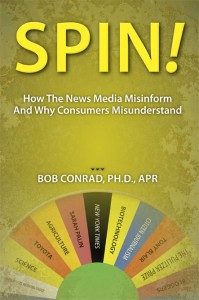 How does one write an unbiased review of a book written by a friend, especially when the book is about bias? That’s the problem I faced when I volunteered to review Bob Conrad’s Spin: How the news media misinform and why consumers misunderstand.

Before I read Bob’s book, I would have picked something to disagree with just to seem fair. After all, I wouldn’t want to sound biased, even though I freely admit that I am. As Bob points out, presenting two sides as equally valid can unintentionally produce bias on the part of the reader. Two sides of an argument are not always equally valid and people tend to give more weight to the side they already agree with.

What makes this book different from other media criticisms is it points out that the media is not just changing technologically. There has been a lot of work done in the field of human behavior that also affects fair reporting.

Bob argues that a more scientific approach to news reporting would improve things. In one chapter, the news coverage of Toyota’s alleged sticky accelerators, he points out the inherent problems with eyewitness reports. I would argue that sometimes science, especially the so-called “soft sciences” require a subjective interpretation of results. This puts the scientist back in the role of the eyewitness. In the case of the Toyota story though, engineering and manufacturing techniques also played a role. By and large, the media chose to ignore the test results in favor of a “good story” anyway.

The most troubling part of the book, for me anyway, is when Bob writes about people only reading what they already agree with. It’s troubling because I do this myself, especially with political reporting. Over time, I have developed a limited tolerance for left-wing opinions. Does that mean I’m biased, or have I heard it all before and made a valid decision? It all comes back to the inherently fallible eyewitness. What any reader reads is up to the individual.

The most illuminating thing comes at the end with a chapter on solutions. Technology may be driving change in the news business, but there is also a formula to a news story that will need to change along with it. I won’t give away the ending, but there are clues to what a new kind of business model would look like. If existing media outlets don’t pick up some of these ideas, somebody else will. Rather than seeing the death of the newspaper business, we are witnessing the beginning stages of a rebirth.

This is a short book packed with examples and new ideas. Perhaps most interesting in a scientifically inclined book, Bob follows the old show business rule; always leave them cheering for more.