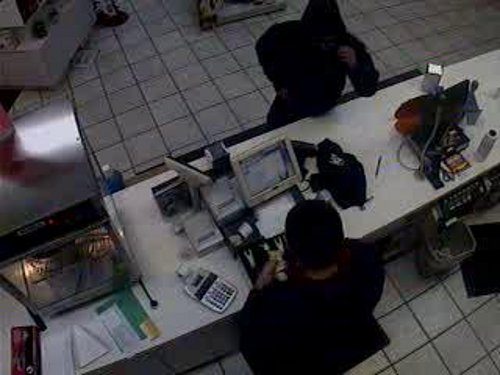 This morning at approximately 6 a.m., the Washoe County Sheriff’s Office received an emergency call from the store clerk at the Galena Market, located at 19990 Thomas Creek Road in the Galena area.

The store clerk reported that at approximately 5:52 a.m., an unknown white male adult robbed the Galena Market at gun point. The suspect was described as being possibly 18-28 years old, approximately 5’7″ to 5’10” tall and a medium build. The suspect wore a dark colored jacket, blue jeans, balaclava, white shoes and blue jeans and was carrying a black sack.

The suspect used a black semi-automatic handgun during the commission of the crime. The suspect left with an undisclosed amount of cash. No vehicle was seen, but a witness described hearing a loud vehicle exhaust just a few seconds after the armed robbery took place.

Detectives were called out to continue the investigation. The store owner is offering a $1,500 reward for information that leads to the arrest and prosecution of the suspect.

This incident is very similar to the recent robberies being investigated by the Reno Police Department.

The Sheriff’s Office Detectives Unit encourages anyone with information on this case to contact them at 775-328-3320 or remain anonymous by calling Secret Witness at 775-322-4900. If anyone witnesses a crime in progress, we recommend immediately calling 911.