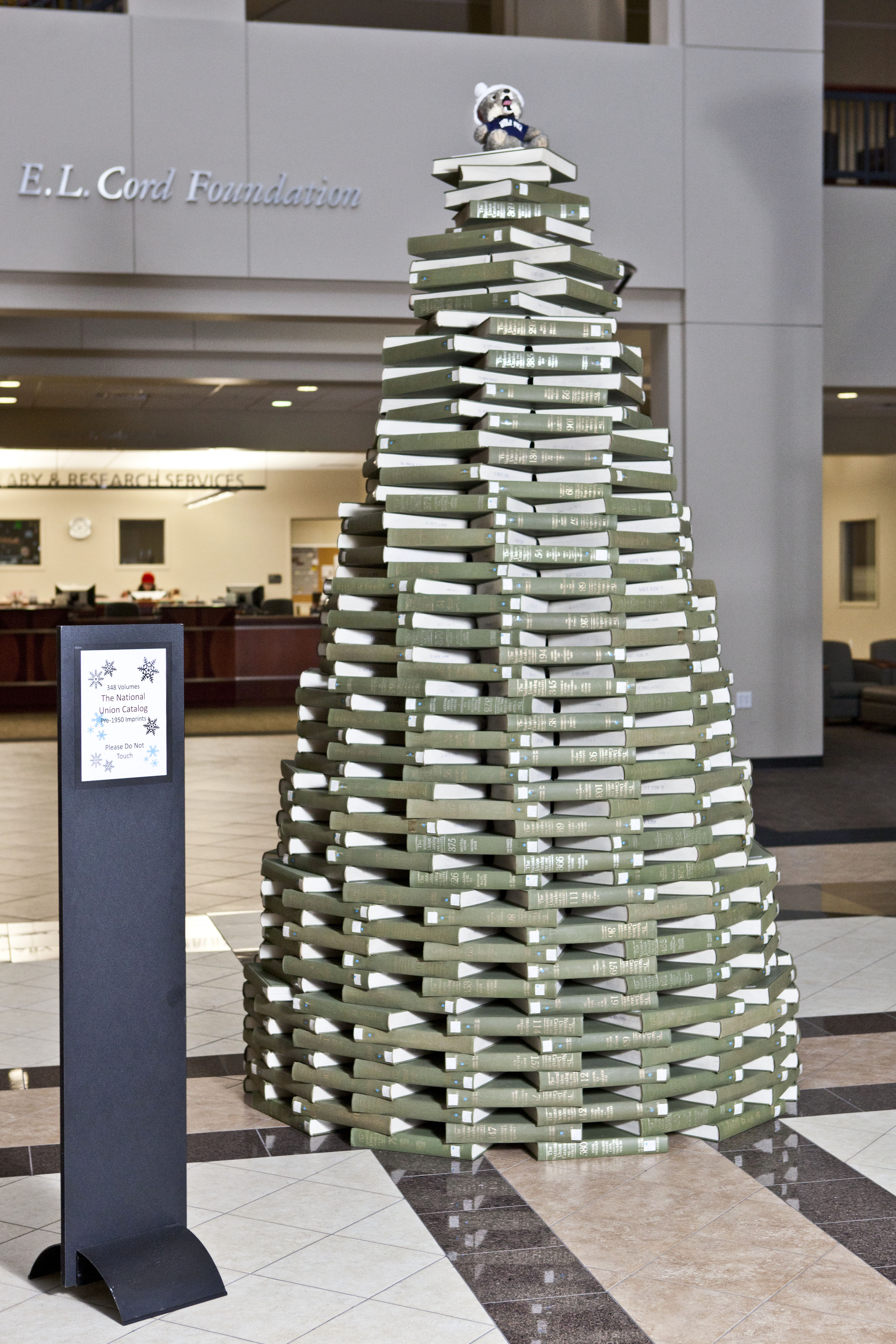 The soaring atrium of the Mathewson-IGT Knowledge Center at the University of Nevada, Reno has an unconventional tree on display this holiday season. Some would call it a green tree, not just because of its color, but because the tree is made entirely of recycled materials – old books.

The 9.5-foot tree was constructed using pre-1950 National Union Catalog books. The rarely used reference books made an ideal book tree, with their evergreen covers and gold lettering on the spine.

The mastermind behind the project was Knowledge Center librarian Erin Fisher. Erin took her idea to Alden Kamaunu, manager of the center’s building operations, in order to make the tree a reality. Kamaunu then recruited library technician Larry Smith to help design and build the masterpiece. Kamaunu and Smith built two prototypes before they came up with a final design.

“It had to be perfect,” Kamaunu said. “It may look simple enough, but most book trees look like pyramids. We wanted ours to look like a real tree. There was a lot of trial and error.”

The tree had to be large in order to be noticed in the spacious four-story atrium of the Knowledge Center. The final design took three hours and 348 books to construct.

According to an online search, the tree appears to be the largest book tree ever built. The base of the tree is made up of 10 books placed in a circle, and as the tree grows in height, the number of books decreases to one final book at the top. Although the tree has not been weighed, Kamaunu estimates it weighs over 400 pounds. The unconventional nature of the tree doesn’t end with the books. Wolfie, the University mascot, tops off the tree, donning a Santa Claus hat.

The tree is located in the atrium inside the main entrance of the Knowledge Center and will remain up until early January 2012. For Knowledge Center hours, go to http://knowledgecenter.unr.edu/libraries/kc/hours.aspx or call 775-784-4636. To view a time-lapse video of the tree’s construction, go to http://www.flickr.com/photos/dstl_unr/6483017043.