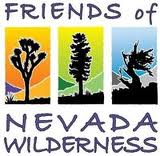 The 5th annual Wilderness Wingding hosted by Friends of Nevada Wilderness at the Grand Sierra Resort on Friday, Dec. 16 was certainly an event to remember. Over 275 people came out to partake in delightful nibbles donated by local businesses like Capriotti’s and The Hub Coffee Co. An awards ceremony highlighted volunteers, organizations, and corporations that played a key role during the 2011 field season.

“We couldn’t have done any of this without our volunteers and supporters,” said Pat Bruce, Stewardship Program Director. “And we want to make sure to thank them.”

In 2011, volunteers worked on over 135 wilderness projects and monitoring efforts, giving 10,528 volunteer hours and donating a total of $225,000 of in-kind labor to Nevada’s wild lands.

Volunteers received bags with an assortment of goodies, including fleece gloves from the Reno Bighorns basketball team, BPA-free mugs from GSI Outdoors, and for the adults – certificates for free pints at Buckbean Brewing Company.

Up for raffle and silent auction were dozens of items – from facials at You MicroSpa to outdoor gear and gift cards from Patagonia and Sierra Trading Post. One of the most coveted items was the PhatCycle Melinda bike from Black Rock Bicycles.

The special awardees each received an appreciation certificate from Senator Harry Reid presented by Susan Lisagor from hisReno office. “What I really love about Friends of Nevada Wilderness is they do this wonderful work with such grace and humor, you’re always having a wonderful time!” she said.

Corporate Partner of the Year – REI