RENO – Officials and business leaders attending a regional summit on economic development here on Thursday emphasized the need to work together regionally to bring in new employers and create jobs.

The summit, called ReCharge Nevada, was attended by about 300 government officials and business representatives to help create a unified front on efforts to help reverse the state’s highest-in-the-nation unemployment rate.

Reno Mayor Bob Cashell said his hope is that all the western Nevada communities will learn to work together on economic development and diversification. It’s not just Reno-Sparks anymore, but job creation efforts have to encompass the counties and cities from Fernley to Yerington, he said. 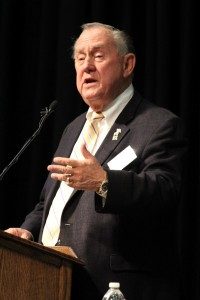 Mike Kazmierski, the newly appointed president and CEO of the Economic Development Authority of Western Nevada who came to the job from Colorado Springs, said the meeting is an important first step to getting everyone to work together.

“The first thing we need to do as a region is accept the fact that together we’re going to be stronger,” he said. “And it’s really not just an agency’s responsible to do economic development, it’s every single person’s responsibility.

At the same time officials were gathered at the Reno-Sparks Convention Center to work on economic development strategies, Gov. Brian Sandoval was in Las Vegas making a similar pitch to the Nevada Development Authority.

The emphasis on diversification and job growth come just as a new report on how to achieve the state’s goals was released on Monday to Sandoval and the members of the newly constituted Board of Economic Development, created with bipartisan support from the 2011 Legislature.

The report, a joint effort by the Brookings Institution and the Stanford Research Institute, now known as SRI International, identifies seven economic sectors, some already in existence such as gaming and tourism, and some emerging such as clean energy, where Nevada should focus its efforts.

The state has put some green, in the form of cash, into the effort as well.

Steve Hill, executive director of the Governor’s Office on Economic Development, said the state has established a $10 million Catalyst Fund to help firms relocated or expand in Nevada. The money will be used to provide grants to local governments for economic development projects.

Hill said it is important that the money be spent efficiently and strategically to pursue the types of economic sectors the state is targeting.

Sandoval and local government officials around the state are focusing on economic development and job creation as Nevada continues to suffer from the recession that first emerged in December 2007. The state has lost 170,000 jobs in that time.

Kazmierski says everyone can help in the effort: