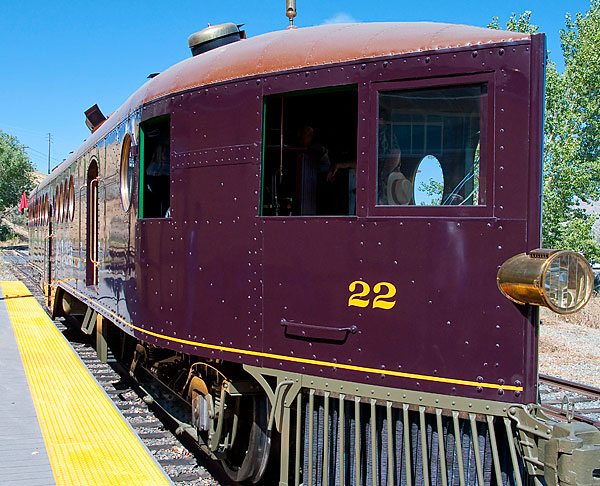 CARSON CITY — Ron James, chairman of the National Historic Landmarks Committee, announced today that the McKeen Motor Car at the Nevada State Railroad Museum in Carson City has been recommended for listing by his committee.

“If the nomination clears the remaining hurdles, this will be the first piece of railroad equipment to win an individual place in the list of National Historic Landmarks,” he said.

The National Landmarks Committee of the National Park System is meeting for three days in Washington, D.C. to deliberate on 15 properties. Recommended nominations will subsequently appear before the Advisory Board for the National Park System, which then recommends nominations for listing by the Secretary of the Interior, Ken Salazar. James also sits on the Advisory Board and serves as the state historic preservation officer for Nevada.

“I couldn’t be more delighted by the outcome of yesterday’s meeting,” said Peter Barton, the administrator for the Nevada Division of Museums and History. Barton appeared before the committee to present the nomination, which was drafted by Michael “Bert” Bedeau, district administrator of the Comstock Historic District Commission.

“Listing of the McKeen Car will boost our efforts to gain national recognition for this important resource,” Barton added. The McKeen Car was previously granted the lower level of recognition by being listed in the National Register of Historic Places.

Other locomotives and rolling stock are listed as parts of districts. Seven other sites – including Virginia City and Hoover Dam – are listed in Nevada, and there are fewer than 2,500 landmarks listed nationwide.

The McKeen Motor Car is significant as a rare example of William McKeen’s effort to use internal combustion engines for rail travel, which previously had only used steam propulsion. McKeen also experimented with streamlining and use of lightweight metals for his motorized railcars. This resulted in lower capital and operating costs and had the effect of preserving passenger and express service on lightly-populated railroad branch lines across the United States.

Approximately 160 McKeen Motor Cars were built from 1905 to 1920. Nevada’s example of the McKeen Car served on the famed Virginia and Truckee Railway after the turn of the 20th century. Once retired in 1945, the vehicle was converted into restaurant and then retail space in Carson City. In 1995 it was donated to the Nevada State Railroad Museum, where staff spent years restoring the McKeen Car, the nation’s only survivor of its kind that is able to move under its own power.

“Nevadans should be proud of this rare artifact and of the exemplary efforts of the talented staff at the Nevada State Railroad Museum,” James said. “With this first level of approval, I am hopeful that listing can occur in 2012.”