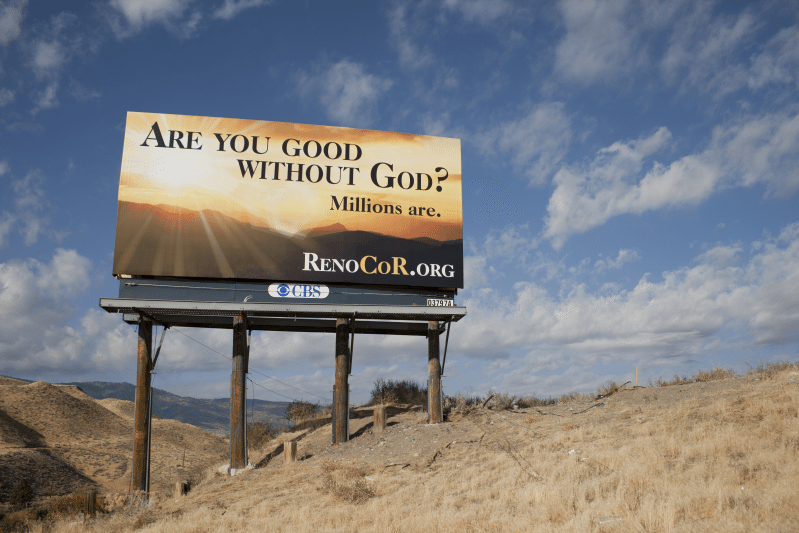 “Are you good without God? Millions are.”

These words, superimposed over an image of a mountain sunrise, appear today on two prominent billboards in Reno. The largest of the two, 12 by 44 feet in size, is on U.S. Hwy 395 South, one mile south of Mt. Rose Junction (Towne Drive), and the other, 12 by 25 feet, is on I-80 West (west of Robb Drive). Both boards are illuminated at night and on the left side of the road. The ads will remain up for four weeks. The billboards have been placed by the Reno Coalition of Reason (Reno CoR) with $6,436.00 in funding from the United Coalition of Reason (United CoR).

The ad campaign marks the public launch of the Reno Coalition of Reason, which is an alliance of five non-theistic groups in the Reno, Lake Tahoe, and Carson City areas, with activities ranging from support to education to activism. As part of its launch, Reno CoR will also march in the Nevada Day Parade in Carson City this Saturday, October 29, behind a banner designed after the billboards.

The Reno campaign is the latest in a nationwide effort. Since the spring of 2009 there have been similar billboards, as well as bus ad campaigns, in 25 states and the District of Columbia. The states are Arizona, Arkansas, California, Colorado, Florida, Illinois, Iowa, Kentucky, Louisiana, Maryland, Massachusetts, Michigan, Minnesota,
Missouri, Montana, New Jersey, New York, Ohio, Oklahoma, Oregon, Pennsylvania, Texas, Utah, Washington, and West Virginia. Reno’s billboards are the first of this type in Nevada.

“The point of our ongoing nationwide awareness campaign is to reach out to the millions of atheists and agnostics living in the United States,” explained Fred Edwords, national director of the United Coalition of Reason. “Such non-theists sometimes don’t realize there’s a community for them because they’re inundated with religious messages at every turn. We hope our effort will serve as a beacon and let them know they aren’t alone.”

Reaching out to the like-minded isn’t the only goal of the coalition:

“We hope that folks will realize that we are a regular part of the community,” said Edwin Lyngar, coordinator of the Reno Coalition of Reason. “People like us live throughout Nevada. We’re your friends and family, coworkers and neighbors. We might even be someone sitting in the pew with you at church.”

“Being visible is important to us,” Edwords concluded, “because, in our society, atheists and agnostics often don’t know many people like themselves. Also, if traditionally religious people can be open about their views, why can’t we be open about ours?”

For high-res images of the billboards, free for media use, go to www.RenoCoR.org.

The Reno Coalition of Reason is a resource for freethinking people, with the goal of uniting the various non-theistic organizations throughout the greater Reno area.

The United Coalition of Reason is made up of over 50 local coalitions nationwide and works to raise the visibility and sense of unity among non-theistic groups.