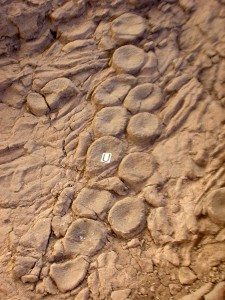 BERLIN, Nev. – Berlin-Ichthyosaur State Park made national headlines this week when paleontologist Mark McMenamin of Mount Holyoke College presented a new, controversial perspective of the ichthyosaur fossils at the park.

McMenamin claimed on Monday that the fossils indicate the giant, ancient marine reptiles were actually prey for a giant kraken. McMenamin presented his findings at the annual meeting of the Geological Society of America in Minneapolis.

According to a news release by the Society, “the fossils at the Nevada site have a long history of perplexing researchers, including the world’s expert on the site: the late Charles Lewis Camp of U.C. Berkeley.”

“Charles Camp puzzled over these fossils in the 1950s,” McMenamin said. “In his papers he keeps referring to how peculiar this site is. We agree, it is peculiar.”

McMenamin’s conclusion is that the ichthyosaur, the state of Nevada’s official fossil, was the victim of a much larger, octopus-like species. The way the fossils at Berlin are arranged “…resemble the pattern of sucker discs on a cephalopod tentacle, with each vertebra strongly resembling a coleoid sucker. In other words, the vertebral disc ‘pavement’ seen at the state park may represent the earliest known self portrait.”

Among evidence of kraken attacks are many more ribs broken in the shonisaur fossils than would seem accidental and the twisted necks of the ichthyosaurs, according to the Society.

“It was either drowning them or breaking their necks,” McMenamin said. “Modern octopus will do this.”

What if there was an ancient, very large sort of octopus, like the kraken of mythology? “I think that these things were captured by the kraken and taken to the midden and the cephalopod would take them apart,” he added.

McMenamin’s presentation drew criticism from the scientific community, and the news media have taken note. McMenamin’s theory has been covered by the LA Times, Wired News, National Geographic and Slate.com among others.

Berlin, a turn-of-the-century mining town, is preserved in a state of arrested decay. A trail through the town site tells the story of Berlin and its mine. Remains of Ichthyosaurs (pronounced “ick-thee-o-sores”), ancient marine reptiles that swam in a warm ocean covering central Nevada 225 million years ago, are on display at the park’s Fossil House.  These unique official state fossils attract visitors from across the world. A nature trail connects the Fossil House to a nearby campground. Guided tours of the Fossil House are offered from Memorial Day to Labor Day. The park is located 23 miles east of Gabbs on State Route 844. The park is open all year, but winter travel may be prohibited due to snow.