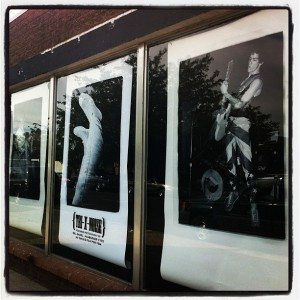 Tri-X-Noise – Friday!
On Friday, October 7, three hard-hitters in the world of street and subculture photography will open the Holland Gallery in full-style. Tri-X-Noise will feature photographs and photographic projects from underground legends Bill Daniel, Jai Tanju/Film Por Vida and Hamburger Eyes. Tri-X-Noise is documentation of obsession in counter culture. Featuring pictures from the raddest 80’s punk bands Dead Kennedys, Misfits, Butthole Surfers, Bad Brains, Big Boys, and many more. The awesomeness doesn’t stop with punk…it also features amazing photos of skating (including Tony Alva!), graffiti and street scenes. All are 35mm and EXTREMELY affordable! This is going
to be a great, great show, SO DON’T MISS THIS! Oct. 7 at the new Holland Gallery, 140 Vesta Street!

Who is Bozo Texino? – Film Sceening
Who Is Bozo Texino? is the product of 16 years riding the rails and documenting the lives and stories of hobos on 16 and 8mm film. Bill Daniel’s film gives the viewer a honest look at the fading tales and legends surrounding the hobo monikers scrawled on trains as well the people who created them. The film will be screened at the Holland Project at 140 Vesta St. on Sat. Oct. 8 from 6-8PM. Following the screening there will be a Q&A session with filmmaker Bill Daniel and the photographers Jai Tanju and Ray Potes featured in Tri-X-Noise. $5 cover

Pierced Arrows + Don’t + The Z-28s
WOW! October 13 is going to be the jam cause we got garage punk legends Pierced Arrows coming through. They’re playing at the Holland Project (THAT’S RIGHT FIRST SHOW AT THE NEW SPACE 140 VESTA!!!!) with Don’t and The Z-28′s. If you haven’t visited the garage in a while, Pierced Arrows is the project of Fred Cole and his lovely wife Toody Cole of Dead Moon. Fred’s been creating the best garage music since the mid 1960′s. And what’s even more impressive, is that none of it is bad! Don’t has equally impressive claims to fame featuring Sam Henry, the drummer from the Wipers! To round out the night we have tantrum throwers The Z-28′s, garage rock that might just be the best in town. Reno is Pierced Arrows’ favorite spot to vacation, lets make it their favorite place to play! DON’T.MISS.FOR.WORLD. October 13 at The Holland Project (140 Vesta St.) Doors 7:30pm/show 8:00om, $5 advance/ $10 door. ALL-AGES! AWESOME!!!!!!!