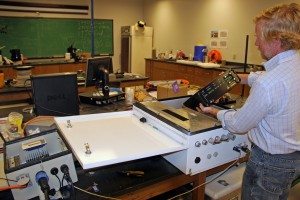 From the suffocating heat of Death Valley to the bone-chilling cold of Antarctica, scientists at the University of Nevada, Reno are leading the way in new, more precise methods of collecting important temperature data from around the world.

“It’s not just a thermometer anymore, we can take the temperature of air, soil, or water at the same instant every 15 seconds, 24 hours a day, every 3 feet for many kilometers,” Scott Tyler, a University of Nevada, Reno professor, hydrologist and director of their national hydrological measurement facility, said. Tyler and his colleagues have adapted distributed temperature sensing methods using lasers and fiber-optic cable for scientific purposes.

With a $1 million grant just received from the National Science Foundation, the environmental monitoring center at the University of Nevada, Reno and their partners at Oregon State University will expand a program that has made it easier and more economical for researchers at educational institutions to gather temperature data by making  high-precision fiber-optic temperature measurement systems – equipment, software and consultation – available at no cost.

The program, entering its third year, has seen researchers from  universities around the country using the equipment from the CTEMPS lab in innovative ways  throughout the world. Tyler is preparing now for his next big adventure, a trip to the Antarctic where he will drop a kilometer-long fiber-optic cable through    650 feet of ocean ice, then another 2,300 feet down to just 150 feet above the ocean floor.

They are shipping spools of fiber-optic cable and recording equipment this week from the CTEMPS facility on the Reno campus to Antarctica. The team travels in October to take advantage of good summer weather for their work.

To get to the field site, his team will travel five hours by plane from Christchurch, New Zealand to the McMurdo Station and out onto the McMurdo Ice Shelf at a place called Windless Bight, where winds can actually reach speeds of 100 miles per hour.

The data of the ocean temperature under the ice shelf will be used in researching the theory of whether sea temperatures are changing and affecting deep sea ice.

Current indications are that the instability of some of the world’s largest ice sheets located around the Antarctic and Greenland may be caused by the presence of warming, deep ocean waters, shoaling over continental shelves, and melting the underside of floating ice shelves.

For the past there years they’ve used the fiber-optic/laser technology around the world in a variety of hydrological, climatological and geological topics such as to measure thermoclines in the 1650-foot-deep Lake Tahoe, soil temperature in Nevada farmlands, glaciers, and at Lake Tahoe to measure near-shore temperatures to help stop the spread of invasive weeds, in Carlsbad Caverns National Park inNew Mexico studying how this enormous cave system “breathes” and in west Africa (Burkina Faso) developing an understanding of the impacts of agriculture on water runoff and soil erosion.