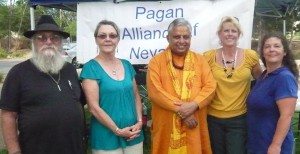 Rajan Zed, who is President of Universal Society of Hinduism, says that all religions are different ways to relate to the Divine, different responses to the Reality and are a positive sign of God’s generosity. A more inclusive understanding of religion is needed and we should learn to live together with mutual loyalty despite our seriously different faiths, Zed adds.

The non-profit Northern Nevada Pagan Pride Project provides information to non-pagans about Paganism, works to make the area a safe place for Pagan community, and participates in charity and community projects. According to rough estimates, there are about 10,000 Pagans in Northern Nevada, who include Druids, Wiccans, Shamans, Alexandrian, Norse, etc., besides eclectic Pagans.

Recently, Lincolnshire County Council in United Kingdom allowed its schools to teach Paganism to students along with six other world religions (Christianity, Islam, Hinduism, Buddhism, Sikhism, and Judaism). Charity Commission for England and Wales has given official recognition to Druidry as a religion.