By Sean Whaley, Nevada News Bureau: The results of the vote in the special election in the 2nd Congressional District went the way that most pundits had predicted: Republican and former state Sen. Mark Amodei will assume the seat vacated with the appointment of Dean Heller to the U.S. Senate.

Amodei jumped out in front with more than 60 percent of the vote when the first results were posted from around the state, and the wide margin between the former Nevada State Republican Party chief and Democrat Treasurer Kate Marshall declined only marginally. Later results showed Amodei leading by 57 percent to 38 percent for Marshall, of Reno. 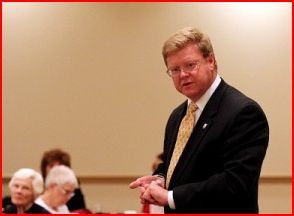 The 2nd Congressional District seat, held exclusively by Republicans since it was created in 1981, will remain in GOP control.

Heller said in a statement: “I want to congratulate Mark Amodei on his victory this evening. As our state continues to struggle in this difficult economy, Mark will be a strong voice in the halls of Congress to help place our nation back on track and get Nevadans working again. I know he will serve our great state with distinction.”

Nevada State Democratic Party Chair Roberta Lange said in a statement: “Kate Marshall fought tirelessly to win a special election in a heavily Republican district that no Democrat has ever won. While we are obviously disappointed in tonight’s results, Kate Marshall will continue to serve Nevada well as state Treasurer. We look forward to electing Democrats in the upcoming general election across the state to fight to get Nevadans back to work and protect Nevada seniors from Washington Republicans who are trying to kill Medicare by turning it over to private insurance companies.”

The district, with a wide margin of Republican voters over Democrats, required a special election when Gov. Brian Sandoval appointed incumbent Heller to the Senate to replace GOP Sen. John Ensign, who resigned.

The contest began with a crowded field as Democrat Secretary of State Ross Miller said the race would be open to all comers in a “ballot royale.” But the state Supreme Court rejected Miller’s argument for a wide-open race, saying both major parties had the right to pick their candidates.

Political observers saw the wide open race as one that would favor Democrats by splitting the Republican vote.

With the court ruling creating a two major party candidate race, however, Republicans were favored to keep the seat. Also running were Independent American Party candidate Tim Fasano and independent Helmuth Lehmann, both of whom were pulling in the low single digits.

With Amodei’s win, the seat will remain in the hands of a Carson City resident. Heller is also a capital city resident.

The district encompasses 16 of Nevada’s 17 counties and a small part of Clark County.

The district has a more than 30,000 Republican voter edge, but there are also more than 60,000 independent voters.

Amodei’s win won’t mean a rest from campaigning. He will have to run for a full term in the 2012 election.