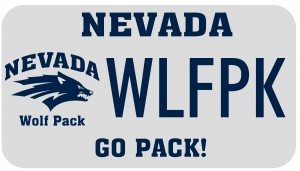 The Nevada Department of Motor Vehicles has collaborated with the University of Nevada to re-design the collegiate license plate.  The DMV is releasing the new plate today and it will be available for drivers throughout the state to purchase and show off their Nevada pride.

“Coming off a great season for Wolf Pack Athletics, it’s exciting to see another way Nevada fans can show their spirit and support for their teams, student-athletes and university,” said University President Marc Johnson.

The new plate displays the Nevada Wolf Pack’s secondary mark, used by its athletics teams, and replaces the older logo formerly used by Wolf Pack Athletics.  In addition, “Go Pack!” runs the bottom of the plate to complete the expression of support for Nevada.

“Wolf Pack athletics has received great support from our community and this is another fantastic way for our fans to show their Nevada pride,” Nevada Director of Athletics Cary Groth said. “This new license plate is just one more opportunity for the community to recognize the success and tradition that our student-athletes, coaches and staff have demonstrated both on the field and in the classroom.”

The plate is currently available for purchase through the DMV for a standard cost of $61.  Personalized plates cost $96, while motorcycle plates run $60.50 and $95.50.  While the old style of the plate will no longer be available, drivers who have it will be able to keep it with no action required.

The University of Nevada was founded in 1874 as the state’s first institution of higher education and has become a top-tier institution both in academics and athletics.  The exposure of Wolf Pack Athletics is a primary contributor to the growing national awareness of the University, which will further multiply when Nevada officially joins the Mountain West Conference in 2012.