By ThisIsReno September 6, 2011
The recently rehabilitated and stabilized historic Griswold cabins are located alongside the Silver State Trail off U.S. Highway 93, about 63 miles north of Caliente, Nev. 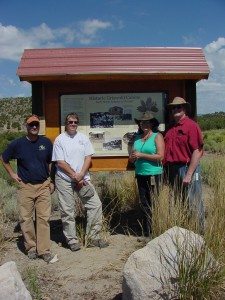 CALIENTE — Whether you plan to camp nearby overnight or just spend a few minutes poking around, the recently stabilized and rehabilitated Griswold cabins and corral alongside the Silver State Trail in Lincoln County, is a must-see slice of Nevada history.  Both cabins and the trail are easily accessible by 4-wheel drive vehicle from U.S. Highway 93.

In October 2010, the Bureau of Land Management (BLM) Ely District staff and the historic rehabilitation and stabilization team for the North Cascades National Park completed a more than two-year project to restore the Griswold site, located one mile south of the Silver King ghost town and two miles south of the historic Silver King Mine.

The rehabilitation and stabilization project – paid for with funding through the Southern Nevada Public Land Management Act – included replacing the cabin roofs, rebuilding the rock and mortar chimneys, and reconstructing collapsing sections of the old corral, as well as clearing away brush and other debris from around the site.  A visitor parking area was added and a nearby kiosk provides information about the history of the site and includes a map of the Silver State Trail.

The Griswold cultural resource site is eligible for the National Register of Historic Places partly because it was constructed by and served as winter headquarters for the Griswold family.  The family played a significant role in the state’s early sheep industry, as well as state politics, in particular Chauncey Warner Griswold, Sr., and his three sons, Morley, Chauncey, Jr., and Gordon.

Chauncey, or “Chan,” Warner Griswold, Sr., arrived in Nevada with his older brother Alfred when he was just 10 years old.  The pair immediately went to work on a ranch in Elko County.  Chauncey also watched over his neighbor’s flocks and over several years’ time was able to accumulate enough so-called “bummer” sheep that he established his own business and married Mary Ellen “Mattie” Dakin.  Over time, Chauncey’s sheep raising operation grew until it was one of the largest operations in the Silver State.  In addition to their three sons, the couple also had one daughter, Rae.

Morley was born in Elko on Oct. 10, 1890.  He earned undergraduate and law degrees from the University of Michigan and served in the U.S. Army during World War I.  In 1926, Morley, a Republican, was elected to the first of two terms as Nevada’s lieutenant governor.  He was made acting governor in March 1934, upon the death of Governor Fred Balzar.   Morley served in office for 10 months before losing the election to Democrat Richard Kirman.

Chauncey Warner, Jr., or Warner, was born in Elko County on Sept. 17, 1893.  Warner served for a time as Director of the National Advisory Board Council to the U.S. Grazing Service while continuing on in the family business. 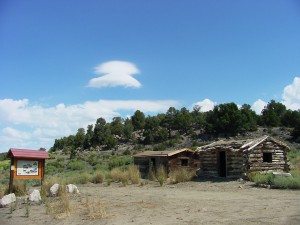 The recently rehabilitated and stabilized historic Griswold cabins are located alongside the Silver State Trail off U.S. Highway 93, about 63 miles north of Caliente, Nev.

Gordon was born in Lamoille, Nev., in 1900.  Educated at the New York Military Academy, University of Nevada and Cornell University, he assumed control of the family business upon the passing of Chauncey, Sr.  Gordon served as a director and president of numerous livestock boards and associations, at both the state and national level, including the Nevada Livestock Production Credit Association, Nevada State Grazing Board and National Advisory Council to the Taylor Grazing Act, as well as local, state and national woolgrowers associations.  During World War II, he was a member of the Nevada branch of the United States Department of Agriculture War Board and Nevada Selective Service Board.  It was Gordon who in 1949 coordinated rescue operations in Nevada as part of Operation Haylift.

The winter of 1948-1949 was the worst winter in the western states since 1889, which is still remembered as the winter of the Great White Ruin.  Ranchers in Nevada, Utah, Wyoming, Colorado, Nebraska and North Dakota were snowed-in and unable to feed their livestock.  Thousands of cattle and sheep lay dead and thousands more were struggling to stay alive.  An eleventh-hour, multi-state rescue effort was undertaken with aid provided by state and federal governments.  The most spectacular was Operation Haylift in which U.S. Air Force personnel piloting C82 “Flying Boxcars” dropped bales of alfalfa to a million sheep and 100,000 head of cattle in remote areas of Nevada and Utah.  The operation was the subject of numerous newspaper and magazine articles, and at least one docudrama, 1950s Aces High!  Operation Haylift, produced and co-written by veteran character actor Joe Sawyer.  Sawyer also co-starred in the film alongside Bill Williams, Ann Rutherford, Tom Brown and Jane Nigh.

To learn more about this and other historic sites worth visiting in the BLM Ely District, contact Leslie Riley, BLM Ely District archaeologist, at (775) 289-1860 or [email protected].