By Sean Whaley, Nevada News Bureau: A federal agency that sought comment on rules that would have applied commercial motor vehicle regulations to farm vehicles on public roadways has decided not to go forward with any changes, bringing a sigh of relief to Nevada farmers and ranchers.

The U.S. Department of Transportation said in a statement that it has determined “that most states have already adopted common sense enforcement practices that allow farmers to safely move equipment to and from their fields.”

The agency did issue new guidance on the issue. 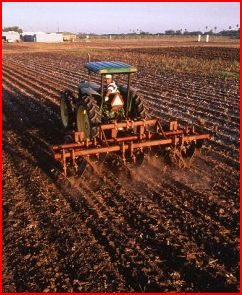 Stalk puller. / Courtesy of the U.S. Dept. of Agriculture

Critics of the potential rules change that was being evaluated by the Federal Motor Carrier Safety Administration said any such change would be burdensome and unnecessary, adding costs and more bureaucracy to family farmers and ranchers.

Applying the code to tractors and other farm vehicles would have required drivers to obtain a commercial driver’s license. Registration of the vehicles would also have been required.

Currently farm vehicles are not regulated under the commercial code and are allowed to use public roadways in Nevada for brief trips as special mobile equipment, said Tom Jacobs, a spokesman for the Nevada Department of Motor Vehicles.

Farm officials around the country expressed opposition to any such change. The rationale for the change was to improve safety on public roadways by requiring commercial drivers’ licenses for those who operate farm machinery.

Doug Busselman, executivevice president of the Nevada Farm Bureau Federation, said the regulations would have added more costs and bureaucracy on family farmers and ranchers at a time when job creation should be the nation’s top priority.

The possible changes caught the attention of members of Congress as well.

Twenty-two U.S. senators sent a letter to the agency last week expressing their concerns: “While we agree road safety should be a top priority, we believe new regulations would amount to yet another government overreach and would have negative consequences on the food production industry.”

The agency today apparently agreed. A statement from the U.S. Department of Transportation says: “No regulations will be proposed for any new safety requirements or changes to the rules governing the transport of agricultural products, farm machinery, or farm supplies to or from a farm.”

Secretary Ray LaHood said: “We have no intention of instituting onerous regulations on the hardworking farmers who feed our country and fuel our economy. Farmers deserve to know that reasonable, common sense exemptions will continue to be consistently available to agricultural operations across the country, and that’s why we released this guidance.”

This guidance – which does not impose any new rules on farmers – follows the Federal Register public notice which FMCSA issued on May 31, 2011, asking farmers, farm organizations and the public to give input on the agency’s longstanding safety rules.

“We want to make it absolutely clear that farmers will not be subjected to new and impractical safety regulations,” said U.S. Transportation Deputy Secretary John Porcari. “The farm community can be confident that states will continue to follow the regulatory exemptions for farmers that have always worked so well.”

“FMCSA is pleased with the input we’ve received from the agricultural community and members of Congress. We received about 1,700 comments and the vast majority called for us to preserve the guidance that leaves states to carry out the farm exceptions as they have for many years,” said FMCSA Administrator Anne Ferro. “We want to make crystal clear that we are not imposing any new regulations.”