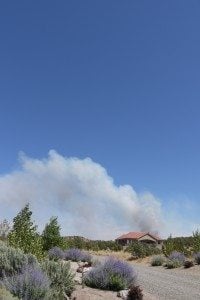 CARSON CITY — State, federal, local and volunteer firefighting resources have responded to numerous lightning- and human-caused wildfires across Nevada so far this year. The state has lost about 94,000 acres to wildfire this summer, which is significantly less than the five-year average of 428,084 acres a year.

State Forester and Firewarden Pete Anderson said, however, that the number of human-caused fires is up significantly this year. The recent Ray May fire near Gardnerville burned structures and nearly 4,000 acres.

Significant fine fuel growth over the last year and rapid drying of vegetation due to high temperatures and winds this summer have combined to produce the ongoing explosive conditions. Wildfires have primarily been started by human starts include grinding, welding, target shooting and vehicle exhaust systems.

Unfortunately conditions remain extreme and the public must be extremely careful while engaged in any heat producing activity, Anderson said. “It is important that every homeowner create defensible space around their property.”

Defensible space improves the chances that structures will survive a wildfire and provides an area for firefighters to suppress an oncoming flame front.

“The potential for the catastrophic loss of life and property has been very real and thanks to the courageous effort of firefighters, no lives have been lost and many have been properties saved,” Anderson added. “As we approach the Labor Day holiday, it is imperative that every Nevadan be cautious while recreating and enjoying our wonderful outdoors. I implore you to stay on designated roads, carry water, a shovel and to please prevent wildfires.”

MORE: link to a map of Nevada wildfires in 2011: http://forestry.nv.gov/fire-program/2011-nevada-wildland-fires/