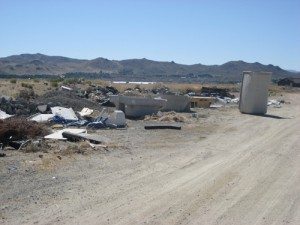 Illegal dumping at the Military Road/Echo Avenue site where crews will be working on Monday.

Washoe County Sheriff’s Office community service crews will clean up three illegal dumps sites next week thanks to a grant from the Community Foundation of Western Nevada’s Truckee River Fund.

Through this grant the Sheriff’s Office was able to rent dumpsters to properly clean dump sites located in Lemmon Valley, Golden Valley, and open space area just north of the intersection of McCarran and Pyramid Way.

“Even when illegal dump sites are not located near flowing water, ground water can become contaminated by hazardous materials from a large, uncontrolled waste heap,” Brooke Howard, Detention Programs Coordinator for the Washoe County Sheriff’s Office, said. “Through this grant, our crews are able to rent the dumpsters needed to properly clean dump sites which could directly impact the Truckee River and Truckee Meadows as a whole.”

Sheriff work crews are scheduled to be at the following locations next week. Crews begin work at approximately 8:30 a.m. and work until about 1:00 p.m. each day:

Since 2008, the Truckee River Fund has awarded the Sheriff’s Office close to $90,000 in grants to fund projects that address local quality of life and public safety issues. In addition to the clean-up dumpsters, grants support the hiring of a work crew supervisor and the purchase of equipment needed for a number of river bank projects such as weeding invasive plant species, removing debris left along the river from homeless camps, and helping to protect trees from beaver damage.

The Washoe County Sheriff’s Office is a member of the Illegal Dumping Task Force facilitated by Keep Truckee Meadows Beautiful. The Task Force was established in 2006 to collaborate efforts by local, state and federal agencies that address regional illegal dumping challenges. For more information, visit www.ktmb.org.