Reno Collective competes for $50,000 as finalist in Evernote developer competition 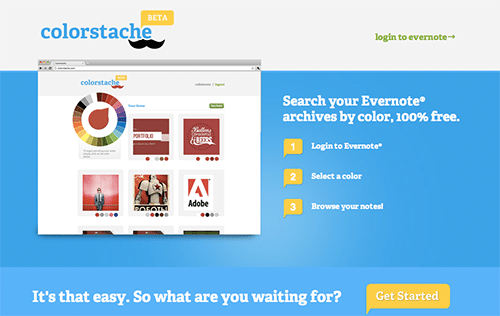 Evernote is a popular web startup that allows its customers to take notes using text, audio, video or images and later organize, share and find those notes easily on your computer, mobile device or on the web. Developers are able to extend the application by writing new software that works with the Evernote platform. To kick off Evernote’s first ever conference, they announced a developer competition with up to $100,000 in cash prizes.

A Reno-based entry, Colorstache, is among one of the six finalists that now vie for the crown of most inventive Evernote application and a $50,000 grand prize. Colorstache was built in 48 hours by Reno locals Colin Loretz, founder of Reno Collective, Chris Yoder, founder of Imagicode, and Kevin Jones, senior designer at KPS3. This was the first time these three individuals had worked together on a project.

Colorstache is one of the nearly 1,000 entries submitted for the Evernote Developer Competition by developers from all over the world and Reno Collective represents Reno, NV among finalists from Canada, Austria, Spain and other U.S. cities.

Colorstache allows users who use a lot of photos and images to browse and organize their notes in a whole new way: by color. Colorstache syncs with Evernote and indexes the colors that make up each photo, allowing you to find red apples, strawberries and a red porsche by simply clicking on a shade of red. Any Evernote users can try Colorstache for free at www.colorstache.com.

The grand prize winner will be chosen based on official judges, community judging, and audience voting at the Evernote Trunk Conference. The official judges consist of Evernote employees and friends of the company, including Tim Ferriss (author of the 4-Hour Workweek and 4-Hour Body), Roelof Botha (partner at Sequoia Capital), Hiroshi Ishii (Associate Director, MIT Media Lab), Mark Frauenfelder (Founder of BoingBoing and Make Magazine), and Loic LeMeur (Founder of Seesmic). Community judging will take place from now until August 17 at http://www.evernote.com/about/etc/vote.php where users will be able to vote once per day for their favorite submission.

The finalists were selected based on a few key factors: finish and polish of the application, utility, originality and integration with the platform. Each will be awarded $5,000 for placing in the contest.

Reno Collective is a community and collaborative workspaces for small businesses, independent workers, startups and entrepreneurs. Colorstache is just one of the many exciting projects that have been built by Reno Collective members and the Reno community. For more information, visit Reno Collective online at www.renocollective.com.