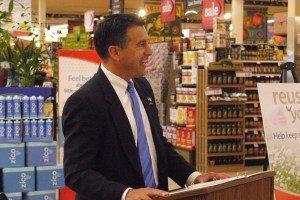 When shoppers use any reusable grocery bag – paper, plastic or canvas – at any Raley’s and Food Source store in Nevada, they will be helping more than the environment, they will also be raising money to preserve and enhance Nevada State Parks.

Through the “NickelAid” campaign, every time a shopper uses a reusable grocery bags at checkout, Raley’s will donate 5 cents per bag to a special Nevada State Parks fund dedicated to help the state’s 24 parks and recreation areas. Raley’s has committed up to $25,000 for Nevada for the 2011/12 fiscal year, and the company will promote the fundraising campaign throughout its 133 stores and on its website. In addition, Raley’s will absorb all administrative fees related to the effort so 100% of the proceeds will be available for use by Nevada State Parks.

“This is a wonderful commitment to building the broader Nevada community by supporting our state parks,” Governor Brian Sandoval said. “On behalf of the people of Nevada, I would like to express our gratitude to the Raley’s Family of Fine Stores and encourage every family to visit the Raley’s nearest them in the next four months with your grocery bags so we can reach the $25,000 goal.”

Over the past four years, the Nevada Division of State Parks has experienced a 60% reduction in its general-fund appropriation, which has resulted in turning one state park over to local government, elimination of positions and cutting operating costs.

“Raley’s has a long history of giving so when we learned of the financial challenges facing Nevada’s parks and recreation areas, we wanted to help by offering NickelAid to our customers in Nevada,” said Mike Teel, president and chief executive officer of Raley’s Family of Fine Stores. He added, “The NickelAid campaign is a small but important first step in helping address a financial challenge facing state parks.”

Earlier this summer, Raley’s announced a similar fundraising program with the California Department of State Parks in response to an announcement that the State of California must close 70 of its 278 parks as a result of an $11 million budget cut in the 2011/12 fiscal year and an additional $22 million cut in the following fiscal year.

According to Eric Johnson, Deputy Administrator, Nevada Division of State Parks, “The money raised through NickelAid will be used to maintain our park facilities in Northern Nevada including replacing picnic tables and developing a new trailhead at Lahontan State Recreation Area. Partnerships with both the private and corporate sectors will allow this agency to maintain and improve what we have.”