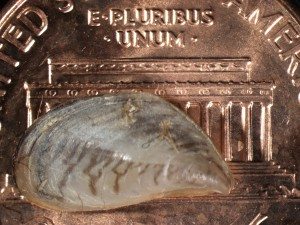 The tiny quagga mussel can cause big problems in lakes and waterways. Photo courtesy of University of Nevada, Reno.

“It could be a sign of more things to come,” Sudeep Chandra, quagga mussel researcher at the University of Nevada, Reno said about the boat found Sunday infested with dozens of quagga mussels. “It’s fortunate that this boat was caught, and shows the importance of the boat inspections to protect Lake Tahoe. It also shows the ease with which this invasive species could enter any Nevada or California lake or waterway.”

Chandra, an associate professor and limnologist and director of the University’s Aquatic Ecosystems Laboratory, has been conducting invasive species studies at Tahoe for 13 years. In 2009, he completed a study that proved adult quagga mussels could survive in the short-term in Lake Tahoe. It was previously believed the pristine lake’s waters were too cold and had too little nutrients to sustain the invasive mussel that has infested southern Nevada’s Lake Mead.

“While we are still not 100 percent certain the quagga could take hold in Tahoe,” he said. “This case shows the importance and diligence needed to protect the lake. It’s these interagency, public private collaborations like the boat inspections that will continue to be important for Tahoe’s future.”

Tahoe had previously been categorized as “low risk” for establishment of the dreissenid mussel. If established, the mussels could forever alter the lake’s sensitive ecology; they could clog water intakes, encrust boats and docks and cover now-pristine beaches with sharp and reeking shells.

“The major pathway for transfer of invasive mussels to inland lakes is from boats, Chandra said. “Boats can come either directly to Tahoe from an infected water body or be transferred to a neighboring water body such as Stampede or Boca reservoirs. From these water bodies, other boats might move an invasive to Tahoe.”

The study recommended the Tahoe Regional Planning Agency and the Lake Tahoe Aquatic Invasive Species Coordination Committee put the mandatory boat inspections in place. Those inspections and washing stations have been in place for some time now and through interagency efforts have prevented other invasive species from entering the lake.

While Lake Tahoe has no known populations of quagga mussels, recent evidence suggesting they have been found in nearby Lahontan Reservoir, within a few-hours drive to Tahoe, has promoted greater concern. Given the proximity of the invasion, Chandra now suggests that a broader, regional approach to protecting lakes is needed.

“A few years ago at the Tahoe Summit, both governors from Nevada and California agreed to tackle the issue of invasive species,” he said. “Now is the time for the states to come together to develop a Western, regional approach to protecting lakes through inspections and boat-washing programs.”

The 2007 discovery of quagga mussels in Lake Havasu, Lake Mead and the Colorado River Basin prompted rapid cooperation and action by regional, bi-state, and federal agencies and non-governmental organizations in the Lake Tahoe region.

“We highly recommend continued monitoring and prevention efforts in Lake Tahoe for quagga mussel and other potential aquatic invasive species,” Chandra said. “The quagga has spread to other Western state lakes, so there’s a good likelihood it could invade Tahoe, and this is a prime example of the mechanism for its spread.”

The University of Nevada, Reno and the Desert Research Institute are initiating a follow-up study to determine the survival of adult and young quagga mussels in the lake. Preliminary findings from this study should be ready by next boating season.