DealChicken: Where news and marketing become one (opinion) 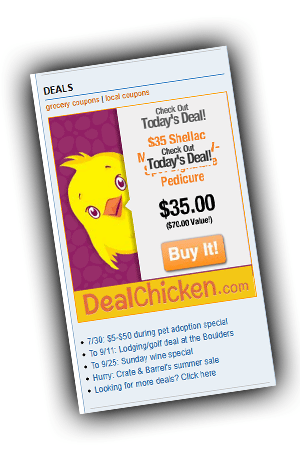 A new deal has been clucking around town. It’s been hard to miss — a cute, yellow bird demanding attention.

That’s DealChicken, the Gannett Co., Inc.’s, latest foray into Internet revenue generation. Much like the originators of similar offerings – Groupon and LivingSocial – “DealChicken is a unique, digital daily deals offering from Gannett that will provide consumers with great local deals and offers from local merchants in more than 50 markets across the U.S. by the end of the year,” according to Gannett.

There has been noted buzz about DealChicken. The effort was promoted officially last week by Gannett with a press announcement.

Another reason for DealChicken’s rise in popularity is the heavy promotion Gannett news outlets have been giving DealChicken launches. Online, television and print ads have been dominant, and social networks have been alive with DealChicken tweets, retweets and calls to sign up for the site.

The reason is in part viral. People like the concept of cheap deals for local businesses and will gladly share that knowledge.

Gannett employees seemed eager to jump into the promotion game. It would be expected that non-news employees would do this – part of Gannett’s mission is a blend of both “media and marketing solutions” – but what’s been striking is when news personnel have jumped into the promotion business, apparently as part of a competition to promote DealChicken by collecting email addresses from followers on Twitter and friends on Facebook.

A question was posed* to news-media ethics experts: Is it ethical for Gannett news personnel to promote the company’s DealChicken coupon business?

Opinions varied, but one point was made clear more than once: news personnel should maintain objectivity by generally avoiding promotional activities.

“Faced by corporate demands to promote a corporate-sponsored promotion, producers and journalists are forced to disregard their own ethics and that of their profession to meet the will of management.” — Walter Brasch

In response to a tweet by Paula Cuadrado, news producer for 12 News in Arizona, that urged her 150-plus followers to sign up for DealChicken, Alfred Mueller, professor and chair of the Department of Communications at Mount St. Mary’s University, said such promotions cross an ethical line.

“Reporters are ethically bound to avoid any behavior that even creates the perception of bias,” he said. “(It) compromises news integrity. If it turns out that executives in the DealChicken coupon business are guilty of some crime, would the news producer in question run a story about the executives being found guilty?

“Her involvement in the promotion of the coupons leads to the impression that she would not. Whether she would or she would not is actually irrelevant,” he added. “The perception of bias is what good journalists need to avoid.”

Mark Grimm, former TV-news reporter and media professor, said that if news personnel post from their personal accounts, there is more leeway with such promotions and that social media have blurred the lines of who is a publisher.

“Should news employees be involved with promotions?” he asked. “Well, anchor people appear at community events all the time that promote what the station is doing. The question is does their involvement compromise their news credibility. This should be judged on a one-on-one basis.”

Nevertheless, he outlined a scenario similar to Mueller’s: “In this case, it would be awkward if it was discovered tomorrow ‘Big O Tires’ had been selling defective tires. How would the producer cover the story given she was promoting their service the day before? Certainly, the company should not be asking their news people to build subscribers. That’s not how news people should be spending their day.”

Walter Brasch, former reporter, editor and emeritus professor of journalism, said that “whenever reporters cross the line from news into promotion and advertising, there is a distinct smell. The wall between news and advertising is breaking down, especially in a bad economy, but the public needs to know that reporters report news and don’t huckster product, especially one promoted by its own company.

“This is an example of reporters crossing that barrier,” he added. “Faced by corporate demands to promote a corporate-sponsored promotion, producers and journalists are forced to disregard their own ethics and that of their profession to meet the will of management. But, there are journalists (who) do stand up to corporate excesses, often at their own financial peril, and they are the ones who would make both the profession and the public proud that there may still be integrity left in the news industry.”

With DealChicken, though, news personnel have become pitchmen for Gannett’s latest money maker. This is in the wake of recent, sizeable layoffs in the company’s history – 700 employees. Researcher and writer for the Poynter Institute, Rick Edmonds, said that while Gannett’s marketing efforts increase, its newsrooms will continue to shrink.

“And they are much more likely to get smaller still than regain some of their lost bulk in the years immediately ahead as legacy ad budgets get shaved in favor of a wide range of digital marketing,” he wrote in the wake of the most recent Gannett layoff announcement.

With DealChicken, the company is on its way to carving a wider digital marketing path. The trick is that, this time, Gannett got its journalists to also be its marketers.

* The same question was asked of the ethics committee chairs from the Society of Professional Journalists. One did not respond; the other declined to comment, saying that he works periodically for a Gannett-owned station. One of the SPJ’s ethical mandates is to “distinguish news from advertising and shun hybrids that blur the lines between the two.”

Police Asking for Assistance Identifying a Person of Interest in...

Opinion: Sincerity and hypocrisy on a Saturday afternoon (w/videos)