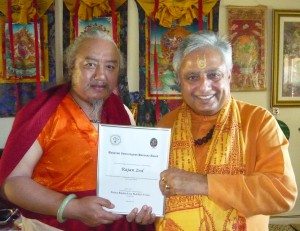 Venerable Lama Jigme Namgyal Rinpoche, leader of the Center, presented the award to Zed, who is President of Universal Society of Hinduism.

Padma Rigdzin Ling Buddhist Center is based on the teachings of the Buddha Sakyamuni and follows Nyingma Buddhist tradition carried by Lama Rinpoche, who claims lineage going back over a thousand years. Center’s vision is “to accomplish the Enlightenment of all sentient beings through our actions of body, speech and mind”.

Rajan Zed is a religious statesman who has taken up Hindu, interfaith, religion, environment, Roma (Gypsies) and other causes all over the world. He is one of the panelists for “On Faith”, a prestigious interactive conversation on religion produced by The Washington Post, and has been bestowed with “World Interfaith Leader Award”. He is Senior Fellow and Religious Advisor to New York headquartered Foundation for Interreligious Diplomacy, Director of Interfaith Relations of Nevada Clergy Association, Spiritual Advisor to National Association of Interchurch & Interfaith Families, etc.