When a Renoite Leaves the Country, part 8

By ThisIsReno Published: July 25, 2011Last Updated on May 22, 2017
A good samaritan waits with us in Attigliano, Italy

Before I left for Italy in June, I had never heard of Attigliano, Italy. After last weekend, I will never forget it or its train station.

Several classmates and I planned a trip to Florence, Italy. Our original plan was to take the train to Siena Thursday evening, spend Friday exploring Siena, then leave that evening for Florence. Two of us opted to take the later train that evening while the others left in the afternoon.

Before we left, I took careful notes about the three trains we needed to catch to reach Siena. I had the train numbers and arrival times in my small notebook. I even had directions from the train station to our hostel in Siena. I felt confident in my research. 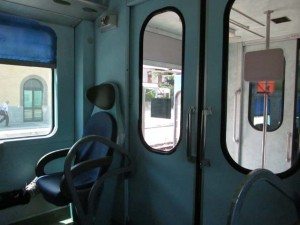 The start of a trip to Sienna

It turns out I forgot an important detail. When we reached Attigliano, we knew we had to change trains. We found the café, purchased our tickets, and found the yellow box that validates tickets. As we walked out to the platforms, we saw a train stopped at the platform we were supposed to leave from. We stopped in the café to ask if that was the train we needed.

The woman who sold us our tickets eyes lit up and motioned toward the door, “Si, si, si!”

Next to her, an elderly Italian woman yelled “Corriando!” while I suspect she swore about stupid American girls. As we looked around, we realized we didn’t know how to get from the first platform to where we needed to be. Even though I had seen many Italians break the rules and cross train tracks, my travel companion and I were not about to try to go around a train.

Then I spotted people climbing stairs to reach the main platform of the train station. Feeling stupid for not thinking of it earlier, we raced down the stairs to the underground tunnel and across to our platform. We were three steps from it when we saw our train start to pull away. It turned out I had neglected to see how much time we had to transfer trains. To the experienced train traveler, ten minutes is plenty of time. To a novice, ten minutes does not allow for stupid mistakes that are sure to be made.

“And now we get to make the biggest fools out of ourselves when we go back to the train café to tell them we didn’t make it,” I told Rachel, my classmate who made the brave decision to travel with me.

One of the things I have learned while traveling is that someone will always help a stranded traveler. It was nearly 8 p.m. and not many trains were still running. A man and a woman in the café overheard our troubles and helped translate while we checked the train schedules. 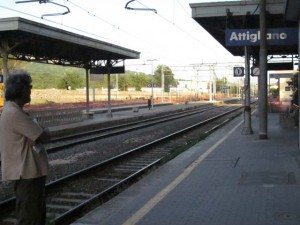 A good samaritan waits with us in Attigliano, Italy

We never made it to Siena. Our options were to take the train to Chiusi and find a hotel or take a train to Viterbo and try again the following day. Neither one of us wanted to risk being forced to spend the night in a train station if we couldn’t find a hotel and did not want to spend unnecessary money so we took the train back to Viterbo.

When we purchased our tickets back to Viterbo, the lady behind the counter warned us that it was the last train to Viterbo. If we missed it, we would be stuck.

“Platform one,” she emphasized. “Do not miss it.”

We made it back to Viterbo just in time to see a full moon rise. I laughed about it it the next day as I successfully navigated my way to Florence.

My adventure in Attligliano didn’t end that evening. Two days later on my way back from Florence, I fell asleep on the train and missed the stop in Attigliano where I was to switch trains. Cursing my lack of sleep the night before, I got off at the next stop. As I started my search for the ticket office, I saw a sign for a train to Viterbo that left in two minutes.

That time I didn’t have any trouble finding the staircase.