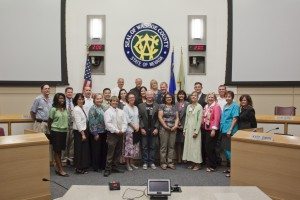 Washoe County and the University of Nevada Cooperative Extension developed an eight-week training program of interactive sessions designed to cultivate a partnership between citizens and their County government. The participants develop skills to be more active in their communities and County government. The Washoe County Leadership Academy began in 2004 and focuses on providing information on the vast services the County provides through personal contact with elected officials and department heads, simulated trials, planning and emergency simulations and tours to behind-the-scenes of the Washoe County jail and other venues. Nearly 200 citizens have graduated from the program since 2004, with 33 percent returning to Washoe County to serve in some type of volunteer capacity.