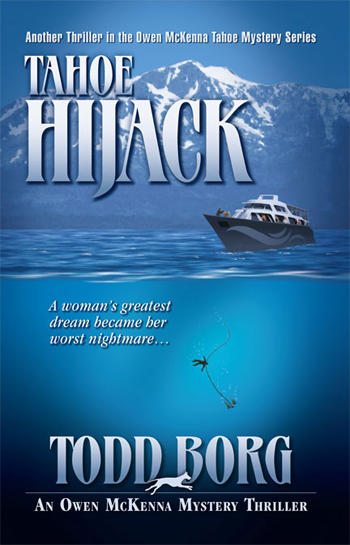 When Arianna Quinn searches out her birth mother Grace Sun, she discovers that Grace is the kindest and most generous woman she’s ever met. But shortly after Anna gets to know Grace, Grace is murdered and the killer comes after Anna. Anna escapes and goes into hiding.

Three years later, Detective Owen McKenna responds to a hijacking on Lake Tahoe. The hijacker claims he knows the murderer of a woman who was killed three years earlier, a woman named Grace Sun.

McKenna discovers that members of a fanatical militia group believe that Grace had knowledge of a treasure that dates back to the Gold Rush and that she told Anna about it. The militia men will do anything to find Anna, get whatever information she has, and then kill her..

While Todd had written short stories, reviews, articles and three novels before moving to Tahoe, the Tahoe landscape gave him the idea for a series of novels with a detective protagonist who lived in Tahoe. The result was Owen McKenna, an ex-cop with a tragic background who moved from The City (San Francisco) to the mountains to study art and earn a slightly more genteel living as a private detective.

Tahoe Deathfall was the first novel in the series and received great reviews. Kirkus Reviews called it “A thrilling, extended rescue/chase.” Midwest Book Review called it, “A tremendous read from a great writer.” The second book, Tahoe Blowup, received equal raves. The subsequent books in the series have received many accolades and awards and have been praised in major newspapers and magazines from coast to coast