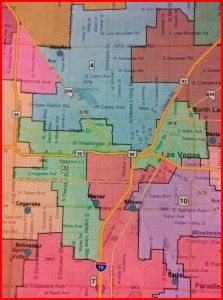 by Sean Whaley, Nevada News Bureau: Efforts to resolve Nevada’s redistricting impasse remain a work in progress after a proposal floated Tuesday by a Carson City judge to use county election officials to draw new legislative and congressional lines ran into some opposition.

The job of redrawing Nevada’s political lines has fallen to District Judge James Todd Russell after two Democrat-approved redistricting plans were vetoed by Gov. Brian Sandoval. Sandoval vetoed the measures after concluding the proposals did not follow the federal Voting Rights Act.

Russell took the attorneys representing the two major political parties by surprise when, rather than opting to hear the evidence and make a decision, he proposed using the Washoe, Clark and Carson City voter registrars as “special masters” to draw the new political boundaries for his consideration.

Redistricting must be accomplished in time for the 2012 election season, which begins early next year. Redistricting happens every 10 years following the census.

Russell gave the parties until July 20 to come up with their suggestions for special masters to help with the process.

“We were, I think, a little surprised by the suggestion but I think once you understood why the judge did it, it made all the sense in the world,” he said. “He’s looking for, and he said this, a nonpartisan approach. He wants to do the right thing, follow the law, and he doesn’t want a bunch of politically motivated people there involved in the process.

Hutchison said he does not believe the redistricting process will be resolved in a special session of the Legislature. More likely Russell will present a plan that will ultimately be acted on by the Nevada Supreme Court.

Marc Elias, representing the Democratic Party in the case, was quoted in the Nevada Appeal as suggesting that before special masters propose a new set of political boundaries, that there should first be a decision on whether the Democrat plans violate the Voting Rights Act.

“Maybe if we resolve the voting rights issue, there would at least be a basis for the masters to start,” he said.

Because of Nevada’s population growth, the state is getting a fourth congressional district, requiring a major redrawing of the existing three districts. The 21 state Senate and 42 Assembly districts must also be redrawn to make populations approximately equal.

There is also a mandate to ensure equitable representation of minorities in the process, with Republicans supporting the creation of a majority Hispanic congressional district in Southern Nevada.