CARSON CITY, Nev. — Experience the energy of a drum circle, the exhilaration of traditional dancing and the appeal of time-honored hand games at one of Nevada’s many American Indian cultural events this summer. The 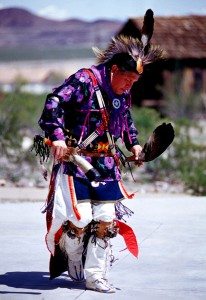 A dancer performs at the Stewart Father's Day Pow Wow in Carson City.

Silver State is home to several American Indian tribes — including the Paiute, Washoe and Western Shoshone — that live in various bands or groups throughout the state, and that showcase their individual heritage at annual powwows and special events.

“By opening powwows and other events to the public, Nevada’s American Indian community not only preserves its traditions, but shares them with others,” Larry Friedman, NCOT interim director, said. “These communities are a vital part of Nevada’s story, one that continues to develop and grow.”

Nevada’s American Indian tribes work together to promote and market themselves through the Nevada Indian Territory, a nonprofit arm of the Nevada Commission on Tourism and important resource for those interested in Nevada’s American Indian culture. Indian Territory offers information about powwows and other cultural activities, as well as information on the proper protocol to follow at these events.

Here’s a look at some upcoming summer events:

Other noteworthy events include the Stewart Father’s Day Powwow, held every June on the grounds of the historic Stewart Indian School in Carson City, and the Walker River Paiute Tribe’s annual pine nut festival, which honors the traditional fall pine nut harvest.

Those are just a few of the events showcasing Nevada’s rich and complex American Indian cultures. For a comprehensive listing and for information on individual tribes and groups, see Nevada Indian Territory, or see the July/August issue of Nevada Magazine, a special edition on Indian Territory.