by Sean Whaley, Nevada News Bureau: Brian Sandoval became the first governor in the nation to be “taken for a ride” in Google’s self-driving car. 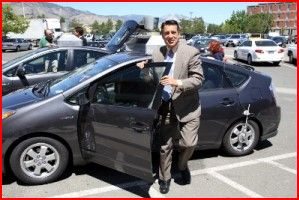 Sandoval went for a ride in the modified Toyota Prius from the capital city halfway through the Washoe Valley before returning to the Department of Motor Vehicles office where the car and a duplicate were on display.

“It’s incredibly impressive,” Sandoval said. “It accounts for all the safety issues. You have the ability to know who is front of you. You have a 360-degree consideration of everything around you. It even tells you when a crosswalk is coming up.”

Sandoval actually drove the vehicle himself from the freeway to the DMV office for safety reasons, even though it can navigate city streets as well as freeways. But the freeway drive was accomplished entirely by the vehicle using its various sensor technologies.

The driverless car technology is likely less than 10 years away, at least for freeway driving.

Nevada became the first state in the nation to legalize the use of driverless vehicles with legislation passed this past session. The DMV will now move forward with regulations by early next year to implement the law.

“Nevada is the first state in the country that is going to be (adopting) regulations for this vehicle,” Sandoval said. “I think it is important for Nevada to be first on this. This is going to be part of the future and Nevada has always been a very progressive state.”

Sandoval said he did not “text” on the trip, although it is legal to text in an autonomous vehicle. Nevada on Oct. 1 will prohibit texting or the use of hand-held cell phones while driving.

The Prius has 68,000 miles and has never been in an accident.

Sandoval said he did take the opportunity on the drive to talk with Google executives about looking to Nevada as the technology becomes a reality.

“If there is an opportunity to manufacture these vehicles in the state we certainly want to be a player in that,” he said.

Tom Jacobs, public information officer for the Nevada DMV, also went for a drive in the car to the Washoe Valley. He said the car went at 65 mph through the valley. The car will not cut off another driver, run a light or speed, Jacobs said.

The technology requires that the car be driven on a specified route before it can they take over operation of the controls, he said.

Gov. Brian Sandoval says the Google auto-car even knows when it approaches a crosswalk:

Sandoval says Nevada is the first state to legalize the use of the vehicles:

Sandoval says he would like Nevada to be involved in the production of the vehicles: