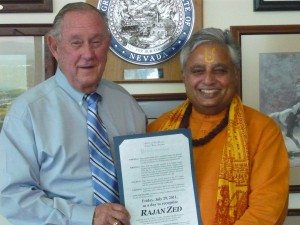 Hindu statesman Rajan Zed has been honored by the City of Reno with a proclamation which proclaimed July 29 “as a day to recognize Rajan Zed.”

Reno Mayor Robert A. Cashell, Sr. handed over the proclamation signed by him under the City Seal to Zed, who is president of the Universal Society of Hinduism, in his office today. Proclamation commended Zed “for his work in making our community, state, country and world a better place to live.”

It also mentioned Zed’s “attempts to bring various faiths together for dialogue and finding common ground.” In the proclamation, Cashell encouraged “all citizens to congratulate Rajan Zed on the fine life he is leading and wish him much success in his future endeavors.”

The proclamation stated that “Rajan Zed is a religious leader who glorifies Reno all over the world” and mentioned various recent honors he received at Golden Temple (highest seat of Sikhism) in India, a Hindu temple in New York, City of Hartford in Connecticut, Kanchipuram SCSVM University in India, Art of Living headquarters in India and more “for his work in interfaith dialogue, Hinduism, religion, European Roma (Gypsies), etc.” It also mentions his opening prayers in the U.S. Senate, various state senates and houses of representatives, and counties and city councils all over the country.

Bestowed with the “World Interfaith Leader Award,” Rajan Zed is senior fellow and religious advisor to New York-headquartered Foundation for Interreligious Diplomacy, director of interfaith relations of the Nevada Clergy Association, spiritual advisor to the National Association of Interchurch & Interfaith Families, and more. He was invited by the president of the European Parliament in Brussels for a meeting to promote interfaith dialogue and is a panelist for “On Faith,” a prestigious interactive conversation on religion produced by The Washington Post.